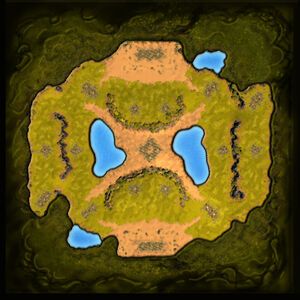 Available
Yrmia is a 1v1 PvP map that is unlocked by default. There is an official spectator version available.

Yrmia is a map with a strategic center and equally important left and right sides. The center of the map features a point with 4 wells and 1 monument, but is dangerously overseen by cliffs on the north and south. The sides feature additional monuments and powerwells, but are spread out and may be challenging to defend.

Note that the monuments on the left and right sides of the map can attack each other if claimed by opposite players. This means you cannot safely take a monument next to your opponent, and you should expect aggression until one of the monuments are destroyed.