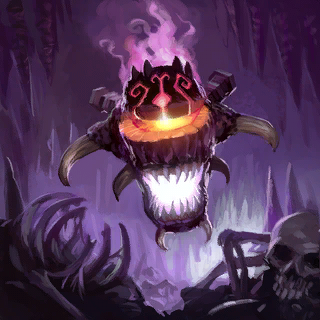 Unit of the Shadow faction. This ultra rare card was released with the Twilight Edition and has no affinity variants, nor a promo version.

A durable creature. One of the cheaper cards for its size and cements shadow's risk and reward theme well, but is rarely seen due to its susceptibility for crowd control, requirements and potential friendly fire.

Autocast: Disintegrates its target slowly over time. Target unit will be paralyzed during disintegration and cannot be attacked by other units. If the spell is interrupted prematurely the target will be released unharmed. May only disintegrate units.

Passive: 200 / 200 / 100 / 100% of all damage done to the unit will additionally also be distributed among all friendly units within a 20m radius. This damage cannot be warded off with the help of damage reducing abilities because it is able to circumvent every buff or protective shield.

Pain Link is something the player always has to keep in mind when using Wrathgazers. Positioning is the key between winning an encounter and losing your whole army.

Split your army and keep a healthy distance to your Wrathgazers to prevent killing your own army as otherwise damage you receive is effectively multiplied. This is one aspect that makes frequent use of Wrathgazers undesireable.
Resilient

Wrathgazers are surprisingly tanky units due to Resilient. They can be used as durable and affordable T3 meatshield when needed and take out key targets while doing so.

Positioning is key - keep your other units away from Wrathgazers to prevent Pain Link from damaging them. Area damage is especially detrimental.

Use Wrathgazers to disintegrate important enemy targets like strong XL creatures or units that have crowd control abilities like Twilight Horrors.

Evocator's Woe, which prevents enemies from playing out cards or

Have units in your army that specialize in taking down buildings, as Wrathgazer is unable to attack buildings at all.

Disintegrating Gaze has no effect on targets that have Leader Immunities. This unit is useless against bosses or units like Twilight Dragon.

The damage distributed to own units by Pain Link is premitigation damage, meaning Resilient does not reduce any damage they receive before it is applied to them - it always works with the original damage of the source.


Example: A unit with an attack that deals 200 damage attacks Wrathgazer once. Wrathgazer takes only 140 / 100 due to Resilient, but own units that would be close to Wrathgazer will take 400 / 200, because of how Pain Link works.

Additonal sources of damage sharing, such as


Example: A fully upgraded Wrathgazer takes 300 damage from an Eruption.

Wrathgazers can be utilized most often in campaign scenarios. In encounters, where taking down select targets is key to progress forward, he can be a valuable asset. He excels especially in situations, where you can take the environment to your advantage such as high ground.


Campaign maps in general are best suited for Wrathgazers, as they generally have much more open spaces to get them into proper positions. This also allows players to reduce the weaknesses of this card the most.

In Battlegrounds Wrathgazer is barely used, due to its orb requirements, suboptimal use cases and overall map structure. Inability to attack buildings is already limiting its potential quite a bit and due to the tight spaces and small corridors in pretty much all randomly generated maps, there is practically no way to reduce its friendly fire potential. As such in almost all cases it is never a consideration in decks and substituted for more pratical units.

Wrathgazer is a niche pick in PvP, since its weaknesses are even more apparent against other players. On its own, it is not playable and requires even more setup to get fair results. Most factions will have some sort of crowd control at their disposable to make Wrathgazer virtually useless. Against pure Fire it will have the best odds, because they lack hard crowd control.

Since Resilient pratically doubles its effective hitpoints, Wrathgazer can take quite a beating and if you can afford it, parking them near wells, be it allied or enemy ones, will take considerable power to get rid of it.

Juggernaut with relative ease, due to their lack of crowd control and they have to invest considerable amounts of power to get rid of it. Against other factions with crowd control on their hands, cards like

Altar of Nihil is a good addition to make them pay for using spells as their power is lost forever when used while active.

Not only is Wrathgazer slow in terms of movement, but also its setup. It is slower than most units for its size and to get it going you need to invest more than 300 power as it is otherwise immediately stopped by any form of crowd control.

You will need other units to take down buildings as it is not able to do anything against them. Defensive structures near Monuments and Power Wells will render any push by Wrathgazer useless.

This is especially true for Wrathgazer, because any slight disturbance during its attack will leave any of its targets unharmed as if it did no damage at all.