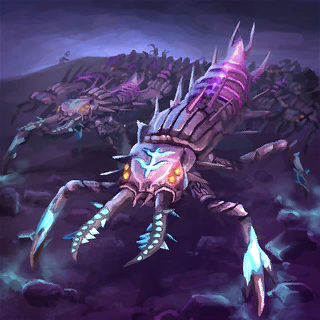 Unit of the Shadow faction. This common card was released with the Amii Edition and has 2 affinity variants,

Considered an alternative to the

Dreadcharger, Witchclaws provide a swift unit to shadows early game. Additionally, their capacity to teleport and explode offers some tactical use.

Witchclaws are not that great in comparison to their other T1 Swift in Shadow, the

Dreadcharger. They can still get work done, but usually are not able to properly capitalize their ability and mostly serve just as a fast S counter than anything else.

Witchclaws are rather pricey so they shouldn't be summoned in bulk. Its best to use them for their speed or not at all.

Witchclaws are a good alternative to the Dreadcharger if you need to go fast, since Shadow T1 lacks swift units outside of the

Nightguard or the aforementioned

Dreadcharger. In battle, they can take down S squads with relative ease but are unlikely to stand out in a fight.

Their ability can add some extra burst damage to buildings or units depending on your affinity, which can save you from having to use

Witchclaws can provide a helpful boost of speed if you need to rush a unit forward for whatever reason. However, it is typically better to run

Nox Trooper since they pack alot of power.