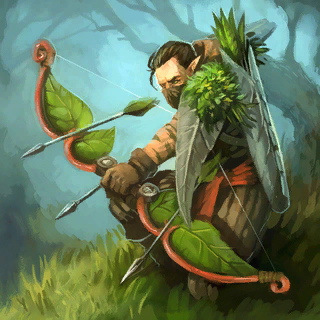 An expensive archer for such an early placement, but one that is made so very worth it. The windweavers ability to attack multiple foes simultaneously cannot be ignored.

Passive: Unit may shoot at two targets at once.

Windweavers are very powerful. But are also expensive and still suffer from the traits that limit archers effectiveness.

Even despite having the third highest hitpoints of the First-Era squad archers, they remain a fairly fragile target, and will die quickly if used poorly.

Combining the Windweavers with the

Shaman is a time-tested combination that is difficult to fail with. Indeed it has become a staple in most if not all games where Nature T1 is played, due to the incredible survivability offered.

Windweavers often combo with the

Shaman as mentioned, as well as the

They combo solidly with most of Natures creatures, especially the

Spearmen due to their versatility.

Windweavers are solid in PvE. Their high damage and multishot pair for a deadly combination, and can be paired with many creatures to reach success.

Firing large groups of Windweavers simultaneously can often erase targets before they even notice you.

Anybody who runs Nature T1 in rPvE will swear by the Windweavers. Simply put, they are too good to not use in rPvE.

The same benefits apply, but Windweavers serve usefulness even up to the T4 Monuments. Some nature players only use Windweavers and Shamans to secure up to T4, proving the effectiveness.