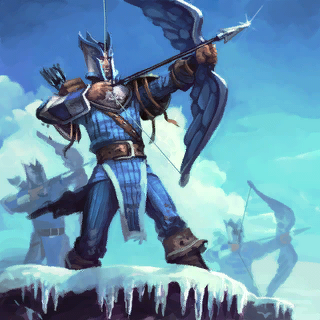 Unit of the Frost faction. This uncommon card was released with the Twilight Edition and has no affinity variants, nor a promo version.

Active: Activate to fire a volley of 4 arrows into a target area of 10m radius. Each arrow deals 8 / 10 / 12 / 14 damage to hostile units and half that damage to buildings and walls, up to 14 / 15 / 17 / 19 in total. Cannot damage Power Wells nor Monuments. Will be interrupted if unit is knocked back. Otherwise lasts until unit is given different orders. Has a long range of 50m but is only available within a 20m radius around friendly structures excluding walls. Targeted area has to be at least 15m away. Reusable every 2 seconds.