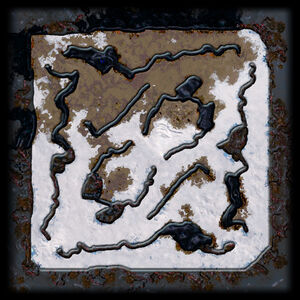 Available
Wazhai is a 1v1 PvP map that is unlocked by default. There is an official spectator version available.

Wazhai is a close-range map, and the only one where players each start with 3 power wells instead of the usual 2. Since taking advantage of the map's many cliffs was not welcomed by the community, this is the only official map that is not part of the PvP ranked matchmaking pool.

The map has prominent cliffs next to every power well and monument, which can lead to long-range units and buildings to play a strong role in the map.