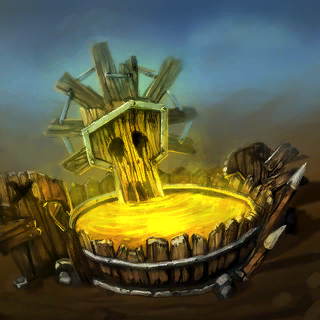 Building of the Bandit faction. This common card was released with the Renegade Edition and has 2 affinity variants,

A structure that carries many similarities to the

Passive: Gathers energy from nearby corpses equal to their former maximum life points to store them away. A maximum of 2500 life points may be stored at once.
Infused Potion
Affinity Dependency:

Passive: Once at least 2000 life points have been stored the building will start to convert them in order to produce an invigorating potion that boosts every friendly unit's damage output within a 25m radius. Affected units will deal 30% more damage for 20 seconds. For each potion 245 / 220 / 200 / 180 stored life points will be used up.
Support building, does not attack.
Corpse Gathering

Passive: Gathers energy from nearby corpses equal to their former maximum life points to store them away. A maximum of 2500 life points may be stored at once.
Tainted Poison
Affinity Dependency:

Passive: Once at least 2000 life points have been stored the building will start to convert them in order to produce a devitalizing poison that envenoms every enemy unit within a 25m radius. Affected units will lose 30 life points per second for 20 seconds. For each potion 245 / 220 / 200 / 180 stored life points will be used up.

Waystation should be used as the name suggests, placing it in areas where conflict or enemy passages are frequented and the corpse gathering can be most effective. When triggered, its potions serve as either a field of debilitation or a beacon of damage.

Simply running creatures through the effect is sufficient to derive benefit from the 30% damage increase, though staying in its aura will incur the buff permanently. Great for defensive holds.

This building serves as an excellent compliment for any staging zones, where one prepares a large assault. The effect can be procured easily by sacrificing some low-level creatures to feed the Waystation and provide its buff for the initial push.

Alternatively, placing Infused Waystations in strategic locations that you frequently pass through can indeed; provide a waystation for your creatures to stop by momentarily and pick up a valuable damage buff.

Because of the fast-paced nature of rPvE, the Waystation is almost completely useless. In situations where attacking waves do reach your buildings, players tend to have T4 armies ready to counterattack and there will be no rhyme or reason to prepare a Waystation.

There is one use for it that can serve some benefit, in casting it as a waypoint for summoning reinforcements to feed the late-game train. If its potion is active, summoned monsters will benefit from its boost for a portion of their summoning.

Buildings in general do not see a great deal of use in PvP most of the time. And Waystation is not what you would call a "PvP-oriented" structure. Nevertheless, it has its perks.

The Infused Waystation can offer a buff which is indefinite in its area of effect, and persists decently long outside of it. Enabling it to be used for boistering a defensive or assisting an assault.

Waystation is really cheap for a building. only 50 power, that's basically nothing.

Waystation has no form of combat ability. Thusly it is constantly vulnerable.

As a building, Waystation is incredibly vulnerable to any creature with Siege.

The function of waystation is rather bad for T3. Both in the Tainted affinity having weak poison, and the Infused affinity offering a meager damage buff.