BattleForge uses a unique game mechanic called void power. Whenever you cast a spell or ability, or whenever your units or buildings are destroyed, a portion of the power spent is recycled into the void pool (usually 90%). This power is returned to the power pool over time.

Understanding void power is crucial to being succesful in the game, as it is the key to using your limited power supply efficiently.

This table lists which things give void power. The percentage is based on the modified cost of the unit, building or spell if you have any cost reducing effects. The power that would be gained as void power when a unit or building dies is called bound power, since it is bound on the battlefield until the unit or building dies.

Every second 1% of void power is added back into the power pool, even though the display only shows an integer of void power flow every 2 seconds, the power calculation is done with floating numbers. There is no minimum void recycling rate, but the maximum is capped at 10 power per second (+20 power per 2 seconds in display) which is reached at 1'000 void power.

The following picture shows a complete overview of the power flow, combining the information about power wells and void power. It is important that you are aware of how power is recycled when playing BattleForge! 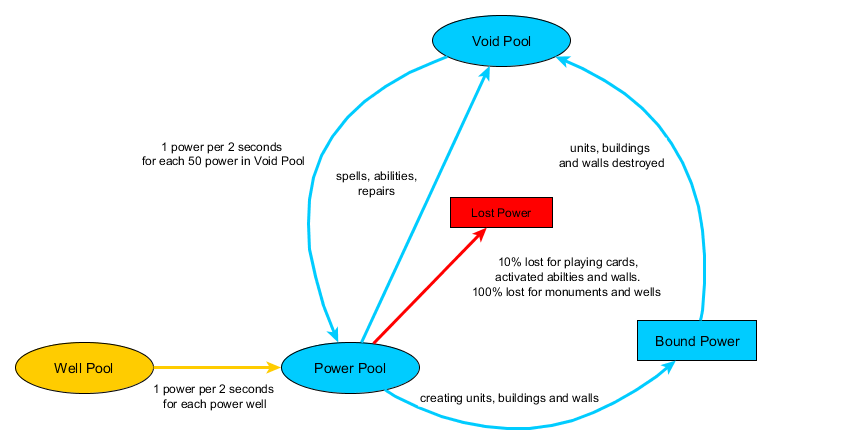 In addition to the depicted energy flow, certain card abilties can move power from one pool to another pool directly. For example Energy Parasite or Shrine of War.