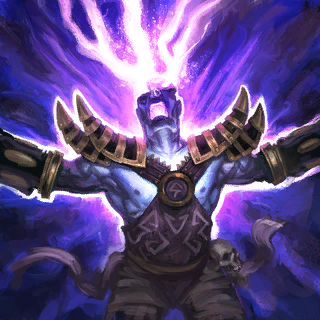 Spell of the Shadow faction. This common card was released with the Twilight Edition and has no affinity variants, nor a promo version.
In Skylords Reborn this card is available to all players as a starter card.

A powerful spell with a wide variety of applications. Unholy Power amplifies both damage and defense to the unit it is cast on.

Unholy Power is an extremely strong spell that is both widely used and effective in gameplay. When cast on a unit, that unit instantly becomes 50% more effective in both dealing damage and taking less. This can turn a unit into a powerhouse difficult to take down and dishing out massive damage, and because the effect scales in percentage it is more effective the stronger a unit already was prior to the buff. Casting it on powerful single units with strong performance is highly recommended in order to maximize the payoff.

Mo are all very strong picks for Unholy Power, and good examples of what sorts of units benefit from it the most.

You can cast it on weaker units in order to transform them into a far more powerful one for a short time. Casting it on units like

Skyfire Drake can circumvent its main weakness of low HP, while units like

Lyrish Knight can benefit from the enhanced damage to circumvent their lower combat strength.

Unholy Power is highly versatile and excels in no singular mission, but is a great boon to all scenarios of any difficulty. Be sure to cast it on units that will benefit the most from the buff in your army to maximize the effect.

Unholy Power is particularly useful in supporting a

Batariel deck, but can also be used to aid in pushing the third and fourth camps by buffing a

Harvester, or a T3 powerhouse unit. In T4, it can amplify a strong XL creature in the push forward like