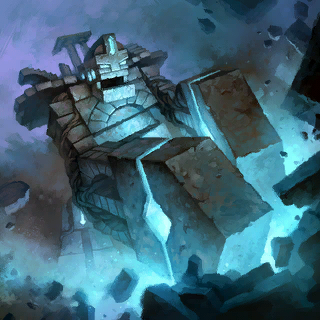 Tremors are bulky, powerful units that are both cost-effective and very capable. However, they are not very fast and are limited in what feats they can pull off.

Active: Activate to emit a shockwave, dealing 85 / 90 / 100 / 110 damage to units and 425 / 450 / 500 / 550 to structures in 15m radius, up to 600 / 635 / 700 / 770 in total. Additionally the damage bonus against structures applies as well. Knocks back small and medium units. Affects ground targets only. Reusable every 15 seconds.
Ground Slam allows the Tremor to unleash a devastating burst of damage to any structure in his viscinity, in addition to disrupting smaller forces that harrass it. This ability can be very useful in most situations where extra siege power is needed, as the damage bonus applies on this ability as well as Tremor's basic attacks.
Siege

Passive: Slow movement.
Tremor moves slower than other L creatures, making it more difficult to catch up to a fleeing opponent or to escape an unfavorable confrontation.

Tremor is very powerful, and shares many similarities to the

Magma Hurler. That said, it also has several weaknesses its rival does not share. Its slow movement speed being its greatest vulnerability, but using it as a siege trooper will mitigate this as you'll be attacking stationary targets.

Facing down enemy creatures will have you at a disadvantage due to Tremor lacking counter damage.

Tremors are very useful and beginner friendly for standard maps. Their high life points and raw damage against buildings give them a high grade of versatility. However, they are not great at killing other tough creatures, especially not XLs. In a fight, Tremor is not likely to come out of it with much health; Or he may die completely.

Tremor is rather slow, making him less useful for RPvE due to its fast-paced gameplay. Nevertheless, he can make a good tank for pushing the 4th camp when a damage sponge is needed.

Tremor can be called upon very cheaply and his high hit points, which exceed 2000 at U2; Give it a great deal of survivability. Its high strength against buildings make for an excellent monument crusher, but its slow speed make it easy to disable it.

As a T3 card, Tremor is incredibly cheap; At only 100 power. You can easily spawn several of them.

It is no XL, but 2000 HP is a high threshold to meet and offers alot of durability in fights, giving Tremor time to position and unleash his fury on an enemy building.

At upgrade 3, Tremor is capable of unleashing a huge burst of damage from his ability against a single enemy structure. If he can get close enough, he can cripple a power well, and nearly cull a monument in half!

Tremor is a very slow creature, especially for a Large sized one. As a result, he has difficulty moving into range to attack. This allows enemy players to kite Tremor with ease, and they have ample time to disable him before he can get close to a vital building.

Being that Tremor is a siege unit, it lacks any form of counter damage; Preventing it from gaining any extra damage against creatures. As such, L-counter cards will have a sheer advantage against Tremor.

Tremor is a melee unit. As such, he is vulnerable to many forms of Crowd Control, and can be rendered harmless by ranged firepower.