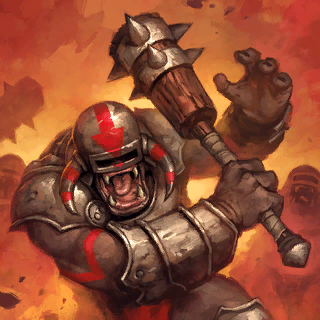 Thugs are regarded as an iconic unit in the arsenal of Fire. Noteworthy for their high damage output paired with a modest power cost, they are the workhorse of the Fire Faction in the early game.

Passive: The unit will join a gang with other Thugs within a 25m radius. When being surrounded by at least 3 Thugs, all incoming damage will be spread among all gang members relative to each unit's current life points. Each gang member will receive at least 10% of the damage dealt to any other gang member, with up to 10 gang members being affected in total. Additionally, affected units take 5 / 8 / 10 / 15% less damage.
Group Pressure

Passive: Unit is immune to Unity and its effects.

Thugs are characterized by their massive damage output for the cost, which is stronger than most T1 Squads off its stats alone, only able to be outmatched by

Burnout, making these the most consistently powerful and efficient of the early game squads. Their low health however, requires upgrades to offset the weakness, making this card far more difficult to use in more difficult missions and scenarios for a fresh skylord.

Thugs, while certainly capable of unleashing havoc and mayhem on their own often come alongside other creatures of fire to support them and cover their weaknesses. The

Sunstriders are a common sight to see alongside these orcish marauders.

Their special ability is quite a potent one:

Gang up!, which allows the Thugs to attain an innate

Unity-like effect, causing damage received to be split amongst each squad whilst in proximity in addition to reducing incoming damage. The more thugs you stack in one place, the more the damage is divided and this can turn a swarm of Thugs into an extremely tanky mass. This however, requires significant power and time investment.

Unity spell from affecting them and stacking the effects to create invulnerable masses of thugs.

Thugs are at their strongest when on the attack and properly supported, either with their own kin or allies of flame. Their slow speed makes them adept at conquering the early game in missions that do not require rapid movement or quick action, and when upgraded they are incredibly versatile, capable of covering offensive and defensive situations, though they are not optimized for the latter.

With their enhanced strength (1080 ATK) against Small foes, thugs excel at taking down enemy squads from both the Wasteland Bandits and the Twilight and can often win most fights on their damage output alone. That said, unless upgraded stronger ranged squads like the

Twilight Slayers will quickly decimate them from a distance.

Several groups of Thugs can become quite a resilient force once

Gang up! has been triggered, and can even defeat some armies bigger than them in the right circumstances.

Thugs are very capable of clearing out the initial camps in most difficulty levels, though they will likely require support in the higher levels. With

Gang up!, Thugs can reliably tank while

Firesworn fire away with impunity, and will do massive damage themselves against opposing squads.

Gang up! active, they can still serve as a strong blob of resilience and aid in tanking through several more camps, even as you move into Tier Two. By the time you reach Tier Three, however, you would likely be better served recycling them for their void power.

Thugs can be found on Battlegrounds in the fire preset. These melee units are capable of dealing large amounts of damage, but are somewhat fragile. They can be deadly to small human squads, which they will deal double damage against.

Try to avoid engaging Thugs with small human squads like

Northguards, as they will be quickly shredded by the immense damage output.

Dreadcharger, but non-human squads can also remain useful like