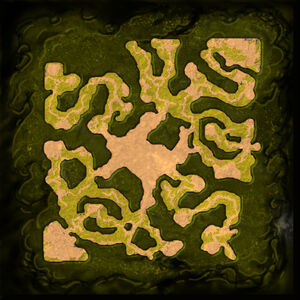 The insect god Urzach has been driven insane by the Twilight curse and has attacked his own temple. You need to protect his former priests and bring Urzach down. Use Urzach’s old altars to aid you and keep Urzach’s new minions from doing the same.

Expert
The Insane God is a 2-player PvE scenario that can be played on Advanced and Expert difficulty. It is part of the campaign story The Twilight Taint.

Save the priests of the god of insects from their insane master and unleash ancient guardian spirits to destroy him.


The priests of Urzach had returned to the temple after the Twilight to resume their prayers and rites. Once more they called out to their lost god.

They did not know what other course to follow and knew somebody had to calm the ancient spirits that gathered in the Fly God’s altars.

The High Priest rose late, finding it harder each day to tear himself from the insane visions that plagued his dreams. He walked among followers already at work cleansing the temple of Twilight taint, and nodded to many in greeting. A low thunder brought his gaze up to the clouds, but no storm brewed. When he felt the ground tremble, he knew why his dreams had become stronger. Urzach was coming home.


Moon gazed down at corpse of the fallen god, refusing to believe this had once been one of their masters. But his final words had been peaceful, as if he welcomed the end of this existence. There had to be a cure for this.

Urzach’s spirit passed Moon once more, for a moment lending comfort like her once benign master. But she felt what he had hidden from her; an existence with no purpose, no power of creation, no place in the order of things.