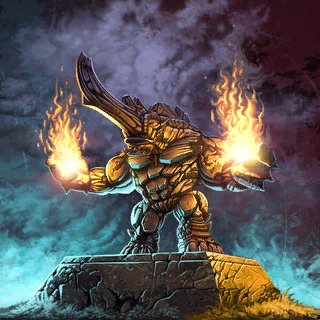 Building of no faction. This rare card was released with the Lost Souls Edition and has no affinity variants, nor a promo version.

Steeped in legends the statue can be turned into one of three states.
The Wrathful Mo
Power Cost: 100 Energy

Toggle: Activate to unleash Mo's Wrath: Within a 300m radius around the statue lightning storms will unfold. Each bolt of lightning deals 500 damage to hostile units. Lasts for 120 seconds.
The Insidious Mo
Power Cost: 150 Energy

Toggle: Activate to benefit from Mo's benevolence: every friendly unit in the game will be immune against all major debuffs but may still be affected by spells like Freeze or Paralyze. Lasts until switched back.
Slowed Construction

Passive: Construction time is increased by 50%.