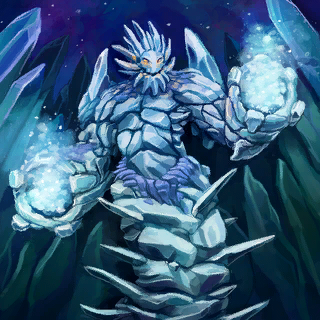 A creature of frost notable for its versatility and power cost, the Tempest can be considered a tower in its own right.

Passive: When being spawned the unit is undazed and causes an explosion of ice that freezes up to 3 hostile units in a 15m radius for 20 seconds. After freeze wears off, targets are immune against Freeze for 10 seconds. Can be spawned nearby enemy units and structures excluding walls. Affects ground targets only.
Frozen Wrath
Power Cost: 0 Energy

Tempest is very cheap for a T4 card, and is capable of putting out respectable damage despite being lower than other cards. Tempest is most powerful on the defense due to how slow it advances in part of Frozen Wrath.

As such, treat Tempests how you would a Tower, if a tower could get up and move on demand. Place them in locations in need of defense or those that cover a contested choke point.

The Tempest excels at felling airborne targets, and makes for an excellent anti-air unit.

Tempest is not well-versed in maps that demand alot of movement. Maps such as King of the Giants and The Treasure Fleet offer few if any opportunities to maximize the usefulness of Tempest.

Maps that depend on defense, such as Defending Hope and The Guns of Lyr, provide the perfect environment through which Tempest can shine as it can root and stay put for most of its lifetime.

Because the end-game is essentially a conga line of XL creatures and constant movement, Tempest is naturally; a poor choice. Even when defending at T4, the creatures that would attack from a late-game camp will easily shred through a Tempest, and spamming them is a waste of power.