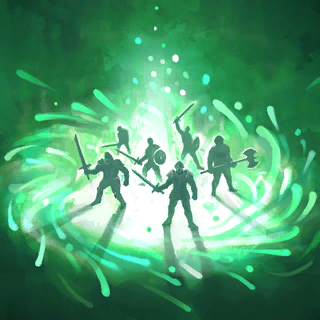 Healing Light
Instantly heals friendly units within a 15m radius for up to 1000 / 1100 / 1200 / 1320 life points in total. Immediately reusable.
This spell can easily heal most T1 and T2 creatures fully, and can provide a decent amount of health to multiple T1 creatures. Additionally, this spells healing can revive dead members of a squad.

Surge of Light is a staple of Nature decks far and wide. The ability to instantly heal damage is invaluable, and provides an extra edge in long battles. However, because the spell has no cooldown it can be easily spammed and thus chew through power and charges rapidly.

Knowing when to use this spell is key to effective use of it.

Surge of Light is an effective buffer for early combat, where units may run into trouble especially on higher difficulties. There are many circumstances where this spell is useful but casting it too early can easily waste power, and casting it too much will do the same.

Surge of Light can help with the early pushes into the initial camps and aid in obtaining T2 and T3, but the spell is less effective later on, and is better replaced by

Shaman, this card is often not even necessary in most Random PvE games.