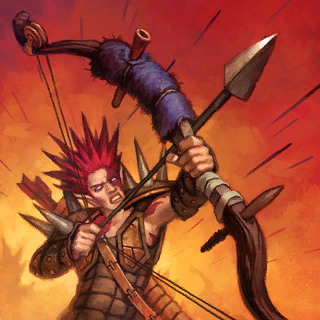 Boasting the highest single target damage output of the early archers, the Sunstriders are an immense offensive force. Furthermore, their capacity to suppress enemy buildings grants them a special tactical advantage.

Active: Activate to disable enemy building's attacks and special abilities for 15 / 17 / 20 / 20 seconds. Has a long range of 50m. Reusable every 20 seconds.
Serves as a cheap, long range method of inflicting

Suppression on an enemy tower. This ability will still work even with only one Sunstrider alive in the squad.

Sunstriders are powerful and cheap, but easily killed in battle. A common staple in most fire decks, and very useful if they are protected from harm. Their ability to suppress enemy structures provides extra viability outside of tier one, and can aid in pushing enemy camps with minimal cost. Sunstriders pair strongly with

In campaign missions, there exist certain structures that are immune to

Suppression Fire. These include Spawn Buildings and Emitters.

Sunstriders can be found on Battlegrounds in the fire preset. They are powerful archers with the unique ability to disable your towers and other buildings at range with Suppressive Fire. The threat they pose to you in combat is relatively minor but they are still an archer worth considering a threat.

While their performance as an archer is not quite as grand as some other factions, their ability to suppress towers allows them to counter the tower pull strategy that can ease the initial push. Engaging solely with units, preferably small ones is the way to go.