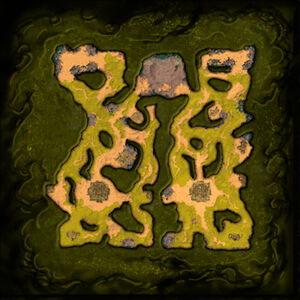 To defeat the infected god, you have to first destroy his two power shrines. Use the magical gate to direct the flow of the enemies, deciding which of you defends and who can attack. Switch it every few minutes by using the controllers near your first monument.

The Search for the Gods

Expert
Sunbridge is a 2-player PvE scenario that can be played on Standard, Advanced and Expert difficulty. It is part of the campaign story The Search for the Gods.

Face an insane god on top of the most sacred place of this world.


When Fire was young and restless, the Earth drew a mantle around it to sooth it, give it purpose.

But as time passed, Fire realized it had been trapped and enslaved so it reached out and shattered the earthen mantle. Far away, in the dark void, Fire found a brother. They took hold of each other forming a single pillar of flame. Thus was light brought to the world and where the two primal fires entwined, life was born. The Amii named this place the Sunbridge.

It is said even they, with all their wisdom and might, fought amongst themselves for control over this sacred place. Terrible wars raged and many died until, desperate to stop the carnage, powerful Amii mages shrouded the place in magic, sealing it from the eyes of a greedy world. As ages passed, the Shrine’s existence fell into legend.

The gods had come to this most holy of places infected with the Twilight curse.Unable to cleanse themselves, they had been weakened. Desperate to find a way to wash off the Twilight taint they had journeyed to bathe in the sacred, pure light of the Sunbridge.

But all they did was infect the Sunbridge itself with the curse. The taint spread to the world and even the sun itself.

What had taken place afterwards, if the gods had died or simply left, Brannoc did not know. Doubt and panic threatened to rise up and engulf him; if he could not find the gods, all would have been for naught.

Then he saw a creature near the Sunbridge.

Hard pressed to recognize one of his former masters, Brannoc finally realized it was Mora, the god of growth. He now gorged himself on the Sunbridge’s power, more monstrous leach than divine being. Though Mora would know where his brothers and sisters were, his godly soul was twisted by the taint and his aid would not be given willingly.

Brannoc ordered the Skylords the order to attack. Even if they learned the terrible truth now, it mattered not. He had to find the gods, then everything would be forgiven, and all would be fixed.


Brannoc saw his image standing over the fallen god, weapon raised. The secret of creation, he would have it! Just this one thing and it would all be over.He remembered the voices whisper the curse to him, they had promised a cure as well, had they not? It was too late to turn back, failure would mean all the pain and suffering had been for nothing. Brannoc screamed his rage into the face of the dying god knowing the broken creature who lay there did not understand. He had shown them their limits, if they only had given him the power of creation instead of fleeing.

But the other gods might still be able to give him the secret.

Suddenly Brannoc felt it, as if a cloak of iron was being placed on his shoulders. Moon was weaving a Banishing spell.

The Skylords had turned against him. He knew had to keep as much of his might as he could.

From the power wells he possessed, from his works in the Forge and the Orbs he possessed, he began to draw power. Across his dying link to the Forge he let it stream into him, offering up his image as a vessel. His love for the fire gave it shape, he began to grow as a new body formed around him. Soon he would truly be the Master of the Forge, an unstoppable titan of flame. But as the link finally was severed Brannoc felt mortality settle back onto him. In his fury and shame he hurled a huge ball of molten fire up at the distant Forge. Blinded for an instant the Skylords closed their eyes, when they opened them once more, Brannoc was gone.

Moon had felt the Forge shudder from the impact of Brannoc’s spell but this wasn’t the only reason her hands shook. What had become of the former Skylord? Had she not offered him enough? Was he still insane with grief for his lost wife, Meanen, even after all these years? The Banishing had felt like vengeance, she had enjoyed it to her own dismay. But as with Viridya, the creature the Banishing had turned Brannoc into was possibly a greater danger than the brooding Skylord; his attack on the Forge had shown that. And he was still out there, hunting the gods.

Moon cast her image down near the fallen Mora. She touched her former master’s brow, seeing how the Twilight taint snaked out, in vain trying to corrupt the apparition she had created of herself.

“Was it worth it? To deny him and go through all this?”

An echo of the god’s spirit, growing fainter with each word, whispered in answer.

“We could not give what we did not have.”

“But you created the Forge! Was the price for its secrets worth all this?”

The god’s voice had become but a whisper.

“We were nothing beyond what you knew. We did not create the Forge. It created us.”

“The mortals dreamt and the Forge used its power. Legends within a legend. Hope made flesh. We could not tell you, even as we found out. Hope must never be lost. But we have failed nonetheless.”

Then he was gone. Moon stood still, her mind crowded with questions. Brannoc must not be allowed to slay the other gods. And if all this pain and discord had taken place because Brannoc could not create things himself, how did he create the curse?