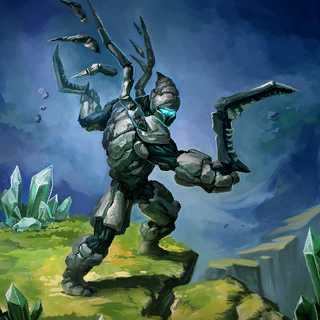 Unit of the Stonekin faction. This common card was released with the Renegade Edition and has 2 affinity variants,

Frost, but not a promo version.
In Skylords Reborn the Fire affinity is available to all players as a starter card.

Stone Shards are cost-effective units that are capable of effective tanking, yet also deal significant damage to certain enemy varieties.

Stone Shards are very cheap to summon and are effective at tanking damage thanks to Adamant skin. They combo well with other Stonekin, like

Stone Shards have the potential to achieve an ATK power of 1320 / 1380 / 1500 / 1620 if they are engaging Medium creatures which match their Fury Counter. As such, try to summon them when faced with certain enemy types.

Infused is most effective against:

Blessed is most effective against:

Stone Shards are a straightforward choice for PVE maps. They tend to be strongest where large amounts of Beasts, Demons, and Undead are found.

Thanks to their low cost and Adamant Skin, they can tank for your siege creatures rather well.

Stone Shards are slow, and thusly have no place in the late game. They can however aid in the push to T4 as tanks.

Waiting to summon T2 creatures is not always necessary however, so these units will see varied application.