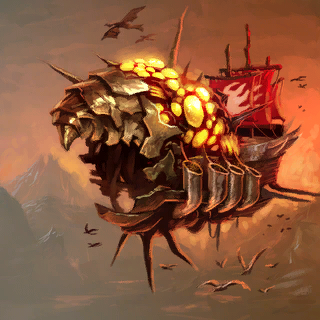 Unit of the Fire faction. This ultra rare card was released with the Twilight Edition and has no affinity variants, nor a promo version.

Spitfires are a notoriously powerful card, both in PvE and PvP gameplay for their raw air-to-ground firepower; Especially against structures.

Autocast: Every 2 seconds, 8 turrets shoot independently dealing 75 damage to enemies in a 5m radius around its target, up to 110 in total. Affects air targets only.
Siege

Spitfires are incredibly strong and fulfill the role of a long-range glass cannon siege fortress. That said, being that leaves many vulnerabilities to consider; The most critical of these being its low life points. Of which the Spitfire owes 6.3 HP to each point of power spent to summon this thing: Virtually a high-risk strategy play.

Where Spitfire excels is where it can abuse terrain utterly. Places where anti-air units and buildings cannot hope to return fire and it can unleash hell with impunity. These are where Spitfire gets its deadly effectiveness and notorious reputation from.

Spitfire can be very useful to take out enemy fortifications from a safe distance when time is not a major concern. While Spitfire cannot pull off what the

Juggernaut can, it can deliver similar if not greater results if enough time is put in, and at much less risk to itself.

Maps with alot of varied elevation, or with large quantities of water (Ocean for example) are prime locations to use Spitfire. That said, it can be just as effective on most other maps.

Spitfire is generally not required in Random PvE due to Tier 3 typically being skipped over. Nevertheless, in dire situations it can be worth calling upon to snipe a troublesome spawn building and ease the push to the next camp.

Spitfire manifests its infamy most in Player vs Player, where its ability to abuse terrain becomes extremely blatant. Many maps position important monuments and wells next to large pools of water, or by mountains that Spitfire can easily fly over and attack from.

These leave major weaknesses in their defensive line, as those players must account for the possibility of a Spitfire raid, and most will only be able to counteract said raid through use of a Spell or by attacking with flying units.

Double damage to structures is a very serious stat that demands fear and respect. Spitfire can deliver upwards of 3500 DP20 with this, so any building left unchecked is a prime target for Spitfire.

Due to the extreme firepower of Air Defense, even from just one side of Spitfire; Flyers of both Tier 1 and Tier 2 will fall in seconds to a concentrated barrage. Only flyers from tier 3 can stand up to the punishment long enough to be a threat.

As a flying unit, Spitfire has a significant mobility advantage over its peers; In addition to being protected from melee creatures shy of XL size.

It goes without saying, Spitfires fragility is its greatest vulnerability. Not even breaking 2000 HP, which is an important threshold for a tier 3 unit.

Because of this, great caution must be taken to keep Spitfire out of an unfavorable situation. If caught off-guard; It will quickly be destroyed.

While its power against structures is unparalleled, against ground units this attack leaves much to be desired. Yes, it is strong for a ranged attack; But Ground Bomb is slow to deliver its payload, giving ample time for most any ground unit to move out of the way.

The slow charge-up and delivery of this attack also means that, if being pressured by attackers; You may have to decide between committing to a ground attack, or fleeing to deal with immediate threats.

As this is a pure fire card up to this tier, Spitfire has limited options when it comes to how it can be supported by other units; Especially in a PvP environment.

Disenchant are the only two available fire spells that can reasonably support Spitfire. The formers regeneration helping offset its low HP, and the latter being able to save Spitfire from a lethal

Gravity Surge or a

Stormsinger. But aside from these two, Spitfire lacks in terms of synergy.