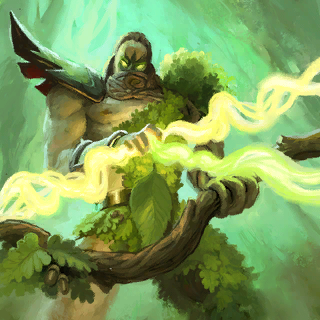 Unit of the Nature faction. This common card was released with the Renegade Edition and has 2 affinity variants,

Although they are rather subpar in direct damage, the Spirit Hunters excel at debilitating their targets with deadly poison.

Autocast: Every 2.5 seconds, unit fires arrows at enemies that deal 4 damage. The arrows are embittered with a strong toxic substance that severely poisons a targeted unit and slowly decreases its life points by 30 per second. Lasts for 10 seconds.
Tainted Bow Attack
Affinity Dependency:

Autocast: Every 2.5 seconds, unit fires arrows at enemies that deal 4 damage. The arrows are embittered with a strong toxic substance that severely poisons a targeted unit and slowly decreases its life points by 20 per second. The damage dealt by this substance cannot be warded off with the help of damage reducing abilities because it is able to circumvent every buff or protective shield. Lasts for 10 seconds.

Spirit Hunters have the capacity to deliver widespread damage with their poison. And excel against most foes, but depend on that damage over time to be effective.

Spirit Hunters can put the strain on enemy healers by spreading their poison, but still have a disadvantage against it.

The gifted affinity has the widest use thanks to its stronger poison and capability to receive buffs to said poison.

The tainted affinity is more tactically sound, particularly when shields and damage reduction are frequently encountered.

Spirit Hunters (Gifted) are the most generally advisable for campaigns. The extra 300 damage poison provides offers a great deal of support against most opponents, particularly those with low hitpoints.

Spirit Hunters (Tainted) are less applicable compared to their other affinity, but do have their strengths. The piercing poison is very effective against foes that grant shields like the Bandit Sorceress, Stonekin Earthkeeper, or those with damage resistances like Twilight Crawlers.

Spirit Hunters are not very practical in Random PvE. The fast-paced gameplay often means that poisoned monsters die before it can really show an impact.

Outside of assisting a push to T4, neither affinity has much benefit to you.