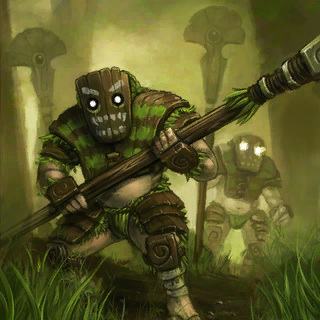 Incredibly powerful first tier units are that of the Spearmen. Although costly to bear, their performance makes up for it.

Toggle: Makes unit more effective against medium units instead of small ones. Lasts until deactivated.

Spearmen--despite the expense--are very powerful and capable units. At U-3 they pack a whopping 792 ATK! Learning when to use their ability is important to mastering their use, and failing to do so can be very harmful to your experience. As you will not be getting the most from this card.

L Units are the death of this card, and should be avoided unless you have a sufficient force.

Spearmen have adequate uses in PvE, that fulfill roles met by other Melee S Squads, such as the

Wrathblades. They are a solid combatant and can dish out a high amount of damage quickly, enabling them to win 1-on-1 fights with other targets that they counter, which other units would struggle with.

Because of their cost, be wary when summoning them in an early low power situation. As dumping that power into them COULD be your downfall, if chosen poorly.

Spearmen are similar in application in rPvE as they are in PvE. They are powerful and versatile, but tend to meet demise more readily due to the possibility of meeting L units early.

Werebeasts tend to see more use due to their speed and regeneration, which offer a more long term power advantage for the battlegrounds.