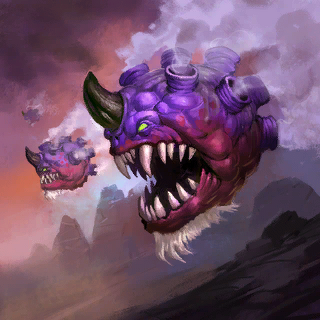 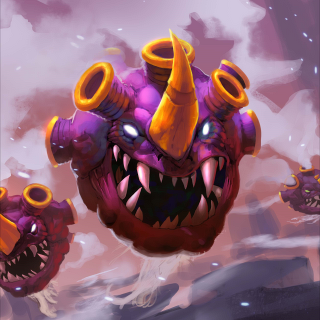 Tainted Dilution
Snapjaws is a Tier 1 (

Unit of the Shadow faction. This common card was released with the Renegade Edition and has 2 affinity variants,

Shadow, and a promo version.
In Skylords Reborn the Shadow affinity is available to all players as a starter card.

One of, if not the weakest creature in the game, simultaneously has one of the most powerful effects.

Infused Dilution Enemies will take 50% more damage as long as they are being attacked by this unit.

The Infused version of Dilution serves to aid in the defeat of tough enemy forces. Be it a formidible creature or a resilient structure, this affinity amplifies any damage the target receives by 50%; the equivalent of applying a counter-bonus.

Dilution will take effect even if Snapjaws are under motion sickness, so feel free to summon them on demand.

Tainted Dilution Enemies will deal 50% less damage as long as they are being attacked by this unit.

The Tainted version of Dilution serves to make dangerous opponents less hazardous. By severely hampering the damage output of the target by 50%, it effectively halves the power of the target; making it easier to prioritize other enemies or render a nasty foe less frightening.

Dilution will take effect even if Snapjaws are under motion sickness, so feel free to summon them on demand.

Snapjaws are a valuable support unit that can make a fight much easier for you if used correctly. The affinity dictates how you approach the nature of the support, and neither affinity is objectively better than the other as they both contribute equally to making a fight easier.

It is recommended to keep Snapjaws out of harms way, as they are horrible in direct combat without other creatures to benefit from their Dilution.

Snapjaws are very helpful in Campaigns, where their Dilution effect can render many tough enemy forces easier to deal with. They are particularly useful at helping defeat Bosses in the later stages of a game, and as such serve uses throughout all eras.

Snapjaws can be helpful initially, but are not likely to see use outside of the first few camps. This is because they are slow, and the only way they can contribute is to be summoned once the train of creatures is advancing far from wells and monuments.

They can be helpful when fighting Bosses, particularly the Infused version as it effectively speeds up the process of killing the boss.

Snapjaws are not practical in Player vs Player, for a number of reasons:

These combine to create an unorthodox entity for a PvP environment. While they can be powerful, it is highly unlikely that they will manage to perform well against an experienced player; and thusly it is recommended that Snapjaws not be used in PvP combat.

No matching cards
Retrieved from "https://skylords-reborn.fandom.com/wiki/Snapjaws?oldid=9568"
Community content is available under CC-BY-SA unless otherwise noted.