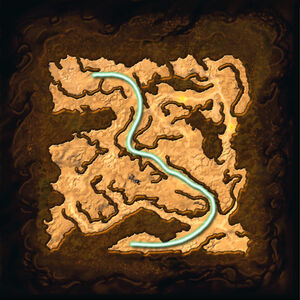 Free the fire people from the clutches of the bandits in the north. Beware the invading Twilight and try to use their attacks to your advantage. Closing the magic gate near the twilight invasion teleporter can force the Twilight to only use flying creatures if you prefer this. Beware a group of Raven Battleships that are on patrol.

Expert
Slave Master is a 2-player PvE scenario that can be played on Standard, Advanced and Expert difficulty. It is part of the campaign story The Search for Twinaxe.

Use the battle between Twilight and bandits to your advantage and free tortured prisoners.


Shane Blight, infamous pirate captain and commander of the Raven squadron strode between the filthy slave cages that littered the wasteland border slave market. The steel bullet in his right eye socket had heated in the sun and sent slivers of pain shooting through his skull. Blight found his mood rapidly deteriorating.

In one swift movement, he grabbed an orc struggling with the rusty bars of his cage. He pulled the miserable wretch close, grinding its face against grimy steel.

“A juggernaut, white as snow! Skin scarred by countless battles! Seen him?”

The orc blinked and tried to wriggle free of Blight, but there was no escaping the iron grip . Slaves and shoppers alike started to whisper, Blight heard bets being placed. From the corner of his good eye he saw an enormous creature, the slave master he presumed, pushing through the crowd towards him. Akin to a juggernaut in looks, it was certainly as massive, though greed, not bloodlust, gleamed in its jade green eyes. Blight gave the orc a final shake, hoping it would gurgle something useful, but was only rewarded with a whimper. Cursing softly, he let the creature slide to the cage floor.

“Pay for the goods, Blight! Then you can have your way with them!” Blight turned to the slave master, absently wiping his hand on his coat.

“Pay? For that?” He sneered as the huge owner opened the cage, pulled the unconscious orc from the cage then motioned for a healer to be summoned. As small boy scurried into the crowd the slave master moved to stand before Blight.

“I know what you seek, pirate,” he boomed, a smug smile spreading across his craggy features.

“There are those in my company who have information you would find of interest.” Blight moved closer, peering up at the large face.

“First, you must purchase some of my premium merchandise.”

Blight examined the sorry mess of slaves in the cages, all of them prisoners from the southern fire tribes. Most were in a sorry state. He stared down at a Firedancer who cowered in her cage, judging her too weak to ever dance again. But Blight wouldn’t need her strength; all he hungered for was information on the White Juggernaut’s whereabouts. He turned back to the slave master, not seeing the Firedancer’s gaze shift to a stare at his back. For the briefest of moments her eyes flared a vile, orange glow and a dark green taint shimmered across her pale skin. As the twilight-infected slave glared at the Pirate Captain, her mind called out to her brethren.


Blight rushed past his men, hurling his impressive frame up to the main harpoon gunner’s position. He knocked his gun chief aside and sat down in the seat, his gaze never leaving the White Juggernaut’s bulk as it strode northward. Blight aimed the huge harpoon gun, shouted a short prayer to all the demons he knew, and pulled the trigger.

With a roar, Giantsbane propelled a long barbed spear into the sky. Blight’s eyes widened as he watched it slice the glaring blue, hurtling towards its target; finally his moment had come. But, just as the deadly missile reached its quarry, the White One disappeared in a flash of light. The harpoon passed through the fading light of a teleport spell and an instant later stood quivering in the rocky ground.

Blight turned very slowly to face his crew. There wasn’t a man his gaze passed over who didn’t desperately wish to be somewhere else. Ever prepared, Umbabwe sighed, shuffled up and wordlessly offered the Captain a cup of heavily spiced sleepwine. The canny witch doctor always seemed to have the draught to hand at times such as this.

Mo found himself once more hurtling along, propelled through the void by QueekQueek‘s teleportation magic. He had been lucky that time. It was unfortunate he would need to follow the Treasure Fleet once again as Twinaxe had not been with the captured crews. Despite that, Mo had enjoyed helping rescue those people, and was glad for their company now. Suddenly a little grinning pig face danced before his eyes.

“What are you looking at?” he growled at QueekQueek’s smirking features. Suddenly Mo felt himself slip away from the freed slaves as the spell seemed to take him in a different direction. So much for the company.