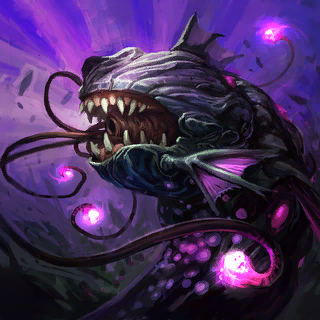 Unit of the Shadow faction. This ultra rare card was released with the Twilight Edition and has no affinity variants, nor a promo version.

Autocast: Every 2.5 seconds, unit hurls a bolt of Nether that deals 400 damage to enemies in a 10m radius around its target, up to 600 in total. Knocks back small and medium units.
Mass Disintegration
Power Cost: 0 Energy

Toggle: Disintegrates up to 5 targets simultaneously over time. Target units will be paralyzed during disintegration and cannot be attacked by other units. If the spell is interrupted prematurely the targets will be released unharmed. Spell turns caster immobile and when disintegrating more than one target at a time the spell applies increasing damage the more targets it affects. Lasts until deactivated.

Mass Disintegration has no effect on buildings or units with Leader Immunities.

Disintegration rate can not be modified by any means.

Life Stealer has no effect on Mass Disintegration.

The self damage component can not be reduced by any means.
Life Stealer

Passive: 35% of the damage dealt by the unit will be added to its life points.
Earth Dive

Passive: While moving around unit takes 50% less damage and knocks back small and medium units dealing additionally 250 damage to enemy units in target area, up to 1000 in total. Affects ground targets only.

Damage dealt by Earth Dive can be modified.

Players should about using other units that rely on corpses such as Overlord. Successful disintegrations leave no corpse, which creates anti synergy with corpse abilities.

Life Stealer allows you to sustain your Shadow Worms and reuse Mass Disintegration.

Shadow Worm is a viable target for

Enlightenment. It compliments well into other armies and with Nature's heals it will be easier to maintain it during Mass Disintegration.

Shadow Worm can be used in campaign maps effectively. Life Stealer allows you to keep them alive in extended battles or situations, where you have to hold against a constant influx of enemies. In most defensive situations you have more tools available to keep Shadow Worms alive and healthy during Mass Disintegration mode, such as placing

Soul Splicer and maintaining them with

Cultist Master or simply leaving Shadow Worm near buildings, where it can slowly regenerate during waves.

The Guns of Lyr, two Shadow Worms are mostly enough to get rid of enemy units completely.

While, not the most popular Shadow Worm is a viable unit that can certainly be used as a standalone unit well. Its disintegration ability allows to dispose of incoming spawns, while other units get rid of buildings or bosses.

A few are already enough to get you going in Battlegrounds.

Shadow Worm can hold its own very well during drawn out battles. 35% life steal allows to regain a significant amount of life points without the need to heal.


With Mass Disintegration, Shadow Worm is able to get rid of masses of units without them even touching it in a super efficient manner. Sustaining it during defense is very easy and only a few units manage to ignore it.

While this is true for other pure factions as well, Shadow Worm in particular is the only tool available in pure Shadow and you have to give up other significant options, such as convenient heals and have to rely on more cost or micro intesive sustain options. Also Shadow Worm has a bit of an anti synergy with other units in Shadow like Overlord; a staple unit in Shadow.


Already giving up on convenient sustain options, Shadow Worm is able to kill itself rather quickly, when faced with several units that boast lots of life points. It's not possible to reduce self damage with Unholy Power or Ice Shields. And if Shadow Worm dies, all remaining units will move on unscathed.