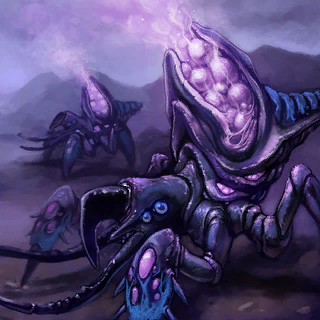 A versatile unit in Shadows Arsenal that can swiftly take out opponents with high damage bursts, and is effective at raiding.

Thanks to their low cost and spamability, Shadow Insects are very powerful creatures that can dish out large swathes of damage with their Soul Shock. Their low health count can be a grave detriment in direct combat however. Protecting them with tanks will help to keep them alive and fire off soul shock with impunity, but one can also run them as a raid squadron due to their solid attack strength. It is worth noting, soul shock is the only way this unit can attack airborne targets.

Shadow Insects are perfectly capable of annihilating a good majority of threats all on their own. A single Shadow Insect, provided it can fire

Soul Shock, can go toe to toe with almost any Large unit all by itself. This makes them extremely useful at dispatching

Twilight Treefiends. A full soul shock charge, or several of these insects are needed to take down

Stonekin Rageflames though. With an effective 1800 ATK against a large unit, they are built for it.

Their high speed makes them very capable raiders and can dip in and out of combat easily, pelting enemies with Soul Shock in hit and run attacks. This can allow them to even defeat massive giants like the