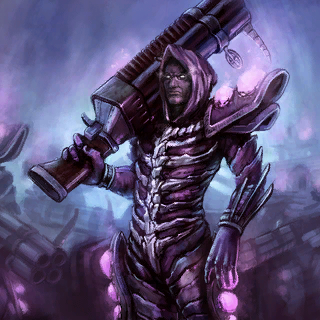 An incredibly cheap squadron that can deliver incredible burst damage with their ability.

Rifle Cultists are cheap, powerful, and highly versatile. Three traits that earn it a spot in most decks.

They are entirely capable of eliminating bases in PvE alone, with enough time.

Rifle Cultists are a famous pairing with

Offering. Because of its cheap cost in unison, it provides a cheap way of restoring T4 charges.

Another notable combo is the famous pairing with

Unholy Power to deal even more insane amounts of damage. The spell only needs to be cast before the sphere is charged up to take effect.

Rifle Cultists have the ability to completely dominate almost any map in the late game thanks to Dark Grenade, where they can slowly crawl their way forward destroying all in their path.

Rifle Cultists can also be used defensively, as Dark Grenade rips through groups of weaker monsters in a flash.

Alternatively, they can be paired with

Offering. As a unit they see no use whatsoever because they are slow, weak compared to other T4 creatures, and because Dark Grenade damages friendly units.

However, any player running a Shadow orb in Random PvE should take Rifle Cultists + Offering, as the combo offers much needed restoration of Charges to keep the late-game trains rolling strong.