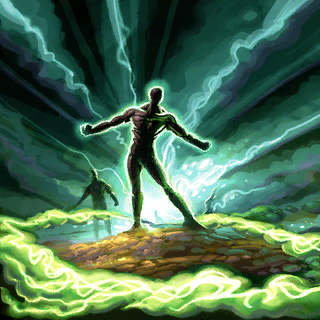 A superboosted hybrid of the

Surge of Light and

Ray of Light, Regrowth is one of the most powerful healing spells in the game.

Regrowth is an extremely valuable spell to carry, even if only running a single nature orb. This in due part to the spells incredible healing potential, and modest cost.

Aim to cast this spell in the midst of a heavy brawl as it provides both instant restoration and gradual regeneration.

Regrowth is extremely helpful in all fields, where it can save entire armies of T4 units from death.

This spell is best served when facing extreme difficulty circumstances.

Due to the incredible damage that late game camps can deliver, regrowth is a no-brainer to carry. It is a card that should be taken if a nature orb is ran for any reason, and is a staple not only for support players, but also frontliners.