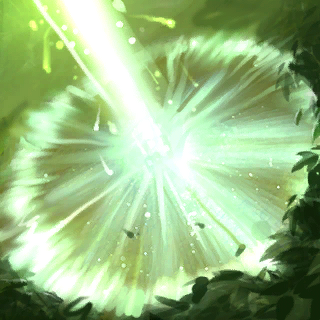 Spell of the Nature faction. This common card was released with the Twilight Edition and has no affinity variants, nor a promo version.

The older sibling to

Surge of Light. This spell provides health through a regeneration aura as opposed to instant restoration.

Ray of Light is best suited to restoring health after a battle, since it heals over time. However it can be cast just as a fight is starting to help offset incoming damage.

Because it costs 100 power, spamming this spell is not a good idea, and it should be saved for when its needed.

Ray of Light is rather helpful in maps with long drawn-out battles at T2. However in the late game it is not nearly as useful, due to the regeneration maxing out quickly.

Ray of Light serves similar applications as in regular PvE. But because many games quickly reach T4 this spell does not see widespread use.

Ray of Light, like any healing spell; can prove incredibly useful in the correct circumstances.

Because Ray of Light heals based on a percentile as opposed to a static value, this spell is much more effective if a creature has a higher maximum life points.

Burrower has 900 life points, owing to a regeneration of 27 life points every second.

However, in T3 the

Razorleaf has 3420 life points at U-3, leading to a regeneration of 103 life points per second.

Because this spell regenerates health, it can serve as an aid in combat to stave off some of the incoming damage.

A regeneration aura in a defensive position could potentially deter an attack from your opponent, giving time to counterattack or prepare a new strategy.

Because this spell is isolated to the zone of casting, it is only effective if your creatures are in its radius. Smart players will often force you to pull out of the spells radius to deny its benefit.

100 Power is expensive for a spell of this nature. Many will find it too pricey for legitamite gameplay.

Because pure nature, and by extension frost/nature depend heavily on their slot choices, accomodating this spell may be a poor decision.