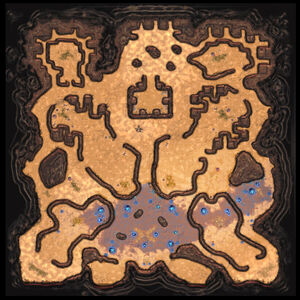 The Amii gates in this land can be used to your advantage. Reach the gate control devices and switch them to let the Stonekin attack the bandits and reroute the bandit battleships so they get destroyed by the Stonekin. Then claim all monuments to free Mo and assist in defeating Blight. Blight will teleport between the north and south, so better keep troops in the south as well.

Expert
Raven's End is a 4-player PvE scenario that can be played on Standard, Advanced and Expert difficulty. It is part of the campaign story The Hunt for Blight.

Free the White Juggernaut Mo and assist him in the final clash with his arch enemy, Captain Blight.


Mo and Blight glared at one another with a hate stoked by years of conflict. Umbabwe’s thin magical barrier, while imprisoning Mo, also protected him from Blight. Both had spent considerable effort trying to break through the prison, but without success. Mo’s head throbbed after countless attempts to charge through the walls and Blight had spent almost his entire reserve of heavy grenades in futile barrages aimed at cracking the magical shell. Now exhausted, the pair had been simply staring at one another for two days.

Blight had locked eyes with Mo for what felt like a heroic amount of time. He was determined not to yield. But as long minutes passed and the desert sun stripped the moisture from his eyes he was unable to stop himself blinking. Blight cursed as a vicious smile spread across Mo’s face.
That makes it my ninety nine to your fifteen mouthed the White Juggernaut through the magical shield. Blight scowled, where had that fool Umbabwe gone? He was the only one who could undo this damn spell! Blight tore himself away from the staring contest, the sealed shield mercifully sparing him the White Juggernaut’s mocking shouts as he scanned the wastelands south of the old Raven base. He motioned and a lieutenant ran over.

“Get whatever ships are ready and have them patrol the monuments in this area,” Blight growled. “The Skylords will be here for him soon!”

The lieutenant drew a deep breath and replied nervously.

“Captain, there still Stonekin loose in this land. And they be mighty angry.”

Blight grabbed the man by his collar and drew him close. “Did you even try to use that sorry lump of fat you call a brain?” he snarled.

“Remember the old Amii gates we used to trick the admiral’s fleet! Use them to lock in the Stonekin. Go!”

He released the trembling man, who saluted and hurried off. Blight’s fingers scratched the skin around the steel bullet that had replaced his eye. The itching was stronger for some reason, perhaps because he knew his score would soon be settled.


Mo tried to silence the cheering crowds of fire people but it was no good. Like eager children, the gathered tribes were determined to celebrate the crowning of their new king and only death or serious hunger would stop them.

“What happens now?” asked a young orc as an elder fire chanter passed by. The old ogre stopped and scratched his head.

“Tradition demands we lift the new king on our shoulders and carry him around for three days, cheering and praising him. Then comes pork and pickles.”

The young orc nervously eyed his new king’s daunting bulk. After a moment, the old chanter patted his arm and smiled.

“Just go get the pickles, son.” He chuckled as the boy ran off.

So, for the first time in the recorded history of the fire tribes, it was the king himself who carried his cheering subjects around on his shoulders for three days. After the celebrations, Mo journeyed to Lyr to continue the search for his wounded friend, Twinaxe. Behind him followed the massive Treasure Fleet, finally on its way home.

The former Red King leaned on his massive blade, resting on a hill near the lyrish border. Ornate crimson armor, once his fearsome trademark, now felt heavy on his shoulders. The Treasure Fleet had long since disappeared, though the huge dust cloud that accompanied it still hovered over the horizon. The big man trembled with barely suppressed rage; his greatest prize was now in the possession of a dim-witted Juggernaut who had stolen his throne to boot.

Alone and forgotten, the Red King threw back his head and howled in fury. Spent, he listened to the silence that settled once more over the place. Suddenly, a dry whisper slipped into his mind like a ghastly breeze.

“We can aid you, king of dust, ruler of nothing. We can bring glory back to you. The treasure, the throne, the power.”

The Red King stared at the ground, a pale blue light now outlined his shadow. Something was behind him, but he dared not turn around.

“For these things,” he croaked “I would travel through the Seven Hells!”

“That journey is far closer than you think” said the whisper, now a chorus of voices swelling in his mind. Trembling, the former king forced himself to turn as the voices rose in triumph. “For the Seven Hells will open their gates! Right here!”

“Gods! Forgive me,” whispered the Red King, through cracked lips, as his mind collapsed at the sight before him.