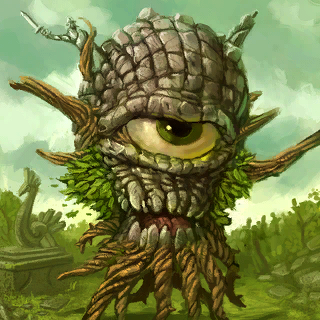 Unit of the Nature faction. This ultra rare card was released with the Twilight Edition and has no affinity variants, nor a promo version.

The Primeval Watcher fulfills a supportive role by paralyzing its foes. Additionally, its unique chain-damage attack allows it to be effective against multiple foes.

Gaze of the Watcher

Autocast: Every 3 seconds, unit casts an energy ray that jumps from one enemy to the next. Deals 600 damage to the first target while the following targets will receive continuously less damage.
Stasis Field
Power Cost: 0 Energy