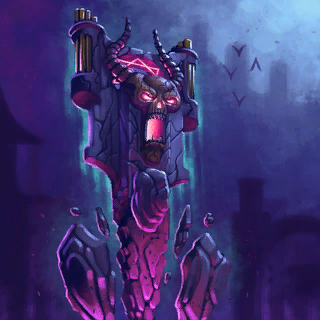 Building of the Shadow faction. This uncommon card was released with the Twilight Edition and has no affinity variants, nor a promo version.

A powerful, notorious tower with a unique dynamic of map control.

Autocast: Every 3 seconds, tower shoots a shadow bolt that deals 95 damage to enemies in a 5m radius around its target, up to 140 in total.
Relocation
Power Cost: 0 Energy

Phase Towers possess a unique application due to their ability to relocate. These towers can keep up with the creatures you have summoned, and as such is more like a beefy unit than a tower.

The damage vulnerability however prevents this ability from being used recklessly.

Phase Towers have an excellent range of dynamic mobility, and can both aid in pushes as well as cross gaps that units cannot.

Phase Towers make an excellent assist tool for clearing the first camps, but do not serve a benefit later on.

Phase Towers have an immense notoriety among the PvP playerbase, for quite a variety of reasons.

900/950 is a very impressive arrangement of stats for a 60 power tower, even moreso when you consider everything this tower can do.

Relocations ability to move Phase Tower on demand grants this structure an unparalleled amount of map control and dominance.

In a mode where the outcome of a fight dictates everything, Phase Tower puts odds highly in their summoners favor by forcing the enemy to take undesirable risks and endure unwanted trades.

Skeleton Warriors, as foes who flee will lose out on DPS against Phase Tower, giving an incredible level of zoning control.

Once cast, every attack delivered to the tower is doubled in effectiveness. Poor timing may get your tower destroyed.