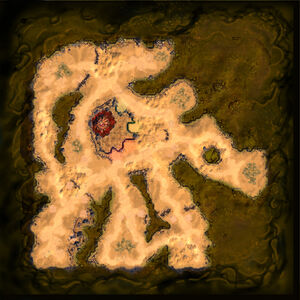 Expert
Oracle is a 1-player PvE scenario that can be played on Standard, Advanced and Expert difficulty. It is part of the campaign story The Search for Twinaxe.

Assist Moon in performing as an ancient oracle and make a king.

Mollo pulled his gaze away from the majestic glow of Oracle Mountain and reluctantly directed his attention back to the game. The ogre’s broad fingers scooped up the bone dice and sent them clattering across the scarred wooden board...

Once more he thought of the glorious days of the Red King’s crowing and the delicious mayhem brought by the Twilight; since then the life of a Crimson Oracle priest had become dreadfully uneventful.

Mollo was not even sure he remembered how to pull off a decent fake prophecy anymore as demand had been abysmal. It was as if the fire tribes had forgotten of their famous Oracle, her presence drowned out by the daily chores of filling their bellies and getting themselves killed.

Mollo grunted in appreciation as a scantily clad human female materialized nearby. Her clothing reminded him of the Ymian dancers he used to enjoy watching and a broad grin split his face. Mollo had always appreciated a juicy mirage, the only good thing about living in the desert. His expression froze as the mirage fixed him with a steely gaze and marched towards the small group of gambling priests.

“Gentlemen, listen up!” said Moon. The squatting, dirty, crimson-clad ogre-priests collectively gaped at her. “I have important work for you. Send word to the fire tribes. Today the people will have a prophecy.”

QueekQueek cursed his fat belly as he ponderously dodged rock formations and dove into crevices in what felt like a vain attempt to shake Blight’s pursuing harpooners. From somewhere behind him, Mo’s angry roars shattered the air. QueekQueek just needed a short moment of respite to teleport them both to safety, but Blight’s blasted gun crews were keeping the air sizzling with grenades, which in turn kept his concentration firmly on simply staying alive. Another heavy cannonball hurtled past and QueekQueek frantically flew into a crack to avoid it. Suddenly, he found himself wedged in the small rock opening, stuck fast and unable to move. Squealing he furiously flapped his little wings in panic, cursing his less then streamlined shape. Suddenly a Raven battleship blotted out the searing wasteland sun above him.

Blinded by panic, QueekQueek forgot about Mo and the treasure, he only knew he had to live; instinctively he triggered the teleportation spell. With a small pop the air rushed inwards where the pig had been stuck just a second before. Somewhere high above, a gunner cursed loudly.

As QueekQueek hurled along the magical currents of his escape spell, he searched for a good spot to emerge; he had to go back for Mo. Suddenly the weak magical echoes of the Southern Wastes paled before a new light, it was as if an old and powerful magic was awakening in the land itself. Like a moth attracted to a flame, the pig flew straight for the center of the strange force.

“We have him!” howled Blight in joy as his harpoon speared Mo’s shoulder.

The Juggernaut whirled around, yanking the harpoon’s chain from Blight’s hand, while a huge white fist shattered the bow of a nearby Raven ship. The White Juggernaut crouched then hurtled forward like a monstrous cannonball, splitting two ships in half as he passed clean through their hulls like an executioner’s axe. Men and timber flew in all directions.

Blight cursed and was about to order his crew to come about for another attack run when he saw Umbabwe release a spell. The witch doctor’s magic struck and the White Juggernaut roared in fury as the pure energy walls of a mystic prison closed about him.

Umbabwe grinned at Blight when something in the distance caught his attention. He moved to the ship’s railing and squinted. It was as if the very land was suddenly ablaze with raw magic, streams of force were reaching from a spot on the horizon, connecting with the White Juggernaut even through his mystical prison walls.

Umbabwe felt something touch the flows of fate and knew that future had just altered in favour of the White One. He whispered the translocation hex, hurling himself along the strange magical currents towards their unknown source. He would not allow another magician to stand in his way.

“How in the Seventeen Hells do I kill him now he’s in your damned finger-wiggler’s prison?!”

Blight ground his teeth and spun to grab the nearest crewman.

“Haul the brute to the base. We will bide our time until my pet ogre returns. Then he and I will have a nice little chat.”


As the fire tribes marched away, cheering, a cockroach finally paused to rest. Its tiny flanks heaved with the stress of having had to dodge countless orc boots and ogre sandals.

After a moment it scurried up a dusty rock and scanned the landscape. Everything looked very wide and very intimidating from its vantage point.

“Thrice-cursed through seven hells and back again!” swore QueekQueek, the tiny maw of the cockroach turning his curse into a high-pitched chitter.

He would not only need to find a potent witch doctor to remove Umbabwe’s last curse, he’d need one prepared to deal with a cockroach. Well, at last he would soon be a rich cockroach if Mo didn’t forget their deal.

A burst of wind almost knocked him off his six legs. He spun around and saw a huge, black raven that had just landed beside him. The bird cocked its head and eyed him hungrily.

“Oooh,” QueekQueek chirped as he racked his new and quite inept insect brain for an escape spell. “Nice birdy!”

It seemed getting rich was not QueekQueeks most pressing concern after all.