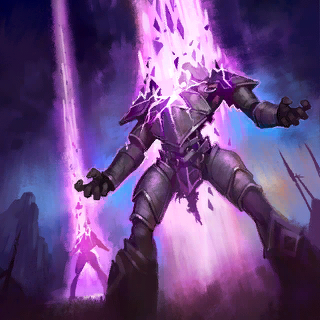 Spell of the Shadow faction. This common card was released with the Renegade Edition and has 2 affinity variants,

Nature, but not a promo version.
In Skylords Reborn the Nature affinity is available to all players as a starter card.

A very common and widely used spell. Offering enables you to restore card charges in a match.

Godspell: Sacrifices an own unit to restore card charges. The card of every unit that has the same size as the sacrificed one will be granted one more charge. The maximum number of possible card charges for a specific card will not be exceeded, though.
This affinity is not often used because of how incredibly useful the other one is.
Gifted Tempting Offer
Affinity Dependency:

Godspell: Sacrifices an own unit to restore card charges. Every card that requires the same amount of orbs to be played out as the sacrified unit will be granted one more charge. The maximum number of possible card charges for a specific card will not be exceeded, though.
This affinity is widespread and used in almost every deck that runs Shadow. Particularly so in Random PvE.

Offering is incredibly useful to have as it allows you to create an army much faster than normal, which can be critical in many situations.

Perhaps the most famous combo is Offering +

Offering is an excellent all-round choice for most decks in PvE. A number of units combo very strongly with it here.

Offering is a Must-have in high level Random PvE. By extension,

Rifle Cultists arealso required. The incredible efficacy of this combo cannot be neglected, and is a major factor in victory.