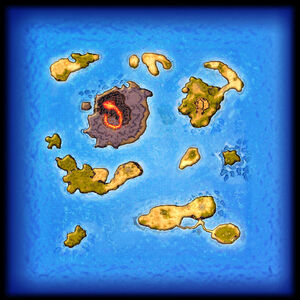 Mo is trapped in on the northern island and Blight's fleet is already attacking. Use the teleporters or the dropship to move along the islands to save Mo. Explore the sea to uncover valuable help.

Expert
Ocean is a 1-player PvE scenario that can be played on Standard, Advanced and Expert difficulty. It is part of the campaign story The Search for Twinaxe.

Rescue Mo from Blight's approaching fleet in a race across several small islands.


Moon searched for Mo, sending her gaze far and wide, but the beast was nowhere within the borders of the Southern Wastes. QueekQueek’s magic was surprisingly strong. Moon was surprised to discover she felt a sliver of worry for the white beast. After a moment’s reflection she convinced herself she only cared for the future of the fire people, not that undignified, ponderous brute. He was probably off causing mayhem somewhere, more a danger to others than anything else. Still, Moon found herself continuing her search.

The crew of the “Drop Dead Red 5” gaped at the spectacle. The refitted Spitfire had just emerged from the lower cloud layer in search of prey. As a dropship it would usually target slow merchant ships by dropping boarding crews onto their decks after swooping out of nowhere.

This time the Drop Dead had not pounced on a ship, but a small island that didn’t appear on any map. The light that had drawn them to their supposed quarry had not been a vast lantern, but a glowing pool of lava. What truly drew their eyes was the huge white beast kneeling upon a stone pedestal situated on rocky ground jutting out the middle of the molten pool. He in turn was surrounded by an army of grim men.

Guns and archers dotted the island and its surrounding rocks. They immediately opened fire on the small dropship which managed to claw back altitude until it was safe once more above the clouds. As the Drop Dead’s wide-eyed captain ignited signal rockets to warn the rest of the squadron off, a shimmering apparition materialized on his quarterdeck. He and his crew stopped their feverish work to stare at the scantily clad woman who stood pointing a delicate finger at him.

“Captain, I require your help.” Moon said in her most demi-godessy voice.


Without warning, Mo found himself unceremoniously spat out of QueekQueek’s spell and deposited roughly in the wastelands. A moment later, QueekQueek’s mercenaries arrived out of the portal behind him. Only when the pig himself floated from the swirling magical vortex did it collapse.

“I take it you want to follow the route of the Treasure Fleet on foot to look for your friend.” QueekQueek grunted as he hovered closer to Mo.

“Well then, lead the way,” said the pig.

Mo scratched the base of his horn. He had to be wary now; no doubt the pig would get rid of him once he had led him to the treasure. Mo just had to hope he found Twinaxe before then so he could make a swift exit and avoid an annoying confrontation. First things first, Mo thought to himself as he marched resolutely deeper into the wasteland, following the path Twinaxe had described to him a month ago.

Moon wandered the halls of the Forge, lost in thought. If the White Juggernaut managed to find the immense treasure they had been searching so feverishly for, he could end the struggle with the giants and finally bring about peace. She just needed to make sure he made it alive and did the right thing with the treasure once he found it. If Mo could manage that, perhaps he would not make such a bad successor to the Red King after all.