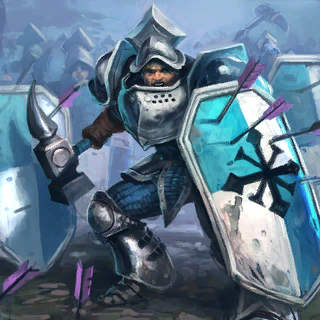 The Northguards are defined by their cheap power cost and their large health pool for an early game squad. Despite this, their offensive strength is greatly lacking without upgrades and makes it difficult to dispatch most foes without spamming.

Brave Defenders
This ability is just flavor text shown on the card representation, it does nothing.

Northguards low power cost makes them a reliable melee squad to spam in the early-game, and make for great tanks to take fire while other cards like

Master Archers fire at range. Because of their low attack strength when unupgraded, large numbers are required to be effective in combat until such upgrades can be procured, to which the Northguards are capable of standing as quite powerful squads.

Master Archers and the

Imperials, which can become a solid army in the early game.

Northguards are durable spam squads for any early-game mission. Though they don't move quickly, their high HP enables them to survive many battles and when properly supported can pay their own weight two-fold. Five Squads of Northguards with Five Squads of

Master Archers can decimate any opposition standing between you and the second monument, and even can remain useful after the fact until enemy opposition becomes too numerous or too powerful for them to handle.

If necessary, quickly summoning Northguards can provide some tanking power on demand when needed, though the

Imperials are better suited to this role.

Large groups of Northguards are capable of dealing with most of the early camps leading up to T2, and if supported by

Master Archers they should survive several battles and incoming waves. Continuing to field them after going T2 is advisable to take advantage of their tanking potential, but you should recycle them once you go T3 as the camps beyond that point will likely become too strong.

Northguards in large quantities can aid in providing damage and tanking for pushes into the later camps. Staying at the front and absorbing damage for your ranged units as well as your allies units, you can fight your way to T4 on difficulty 9 relatively easy. Recycle them as soon as you go T4 and are safe, as they serve no purpose after this point.