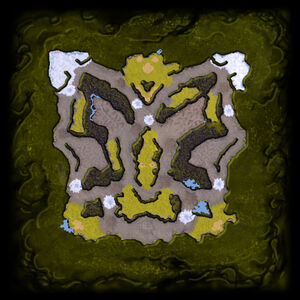 Reach the fragment of the Forge that has crashed into the Shattered Lands. Prevent the Witches of the Twilight from reaching it and destroy the remaining Twilight infestations. Watch out for wild magic spells that might randomly strike at some places.

Expert
Nightmare Shard is a 2-player PvE scenario that can be played on Standard, Advanced and Expert difficulty. It is part of the campaign story The Twilight Taint.

Recover the Shard of the Forge that has crashed into the Shattered Lands.


The fireball had arched skywards, burning its way through the clouds, challenging the new sun with a blaze of its own. Fuelled by Brannoc’s frustration, fear and scorn, it had slammed into the Forge.

As the majestical palace had shuddered, those within realized their home was not beyond attack. Moon’s gaze found the shard of the Forge that had broken away. Its unfettered magic already snaked through the lands, powerful and chaotic. Even the Skylords knew nothing of the Forge’s creation, they assumed it had been created by the gods. But the magic streaming from this piece seemed strange and vile.

A presence was closing in, one she knew and feared even before it had been corrupted by the Twilight. The Sisters of Chaos, witches who claimed most of the Shattered Lands as their own, seemed to know exactly what had crashed into their realm. Even beneath the Twilight insanity, Moon could feel their ancient, vile intent.