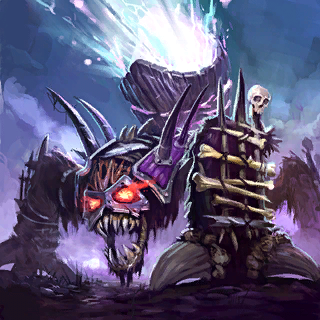 Unit of the Shadow faction. This uncommon card was released with the Twilight Edition and has no affinity variants, nor a promo version.

A powerful endgame shadow behemoth that can unleash tremendously powerful siege attacks at great distances, but must sacrifice life points to achieve this.

Autocast: Every 4 seconds, unit hurls a ball of Nether that deals 666 damage to enemies in a 10m radius around its target, up to 999 in total. Has a long range of 40m. Affects ground targets only. Knocks back small and medium units.
Siege Mode
Power Cost: 0

Active: Activate to sacrifice an own unit in order to transfer the victim's life points into own life points. Reusable every 15 seconds.

Necrofury is slow and cumbersome. But its orb requirements are forgiving and versatile, in exchange for the high power it gives.

One must definitely plan ahead with the Necrofury, as its strength can only show when its siege capabilities are fully utilized.

Necrofury is a strong PVE card that is strongest on the defensive, where Bone Shards can annihilate small waves of attackers. However, it can be utilized for a slow crawling offensive to annihilate dangerous defensive units gradually.

Use of the Necrofury is often terrain dependant. Use at your discretion.

Necrofury is a powerful unit for sniping dangerous defenses in camps, but its main weakness is just that its too slow. You usually won't get much use from the necrofury.

The 4th era is usually not seen in PvP. As such, the necrofury likely won't be seen there.