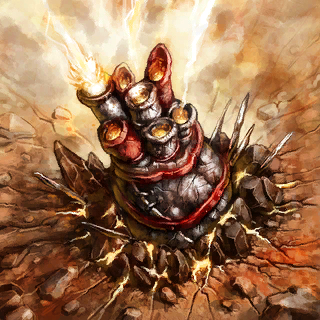 Building of the Fire faction. This rare card was released with the Twilight Edition and has no affinity variants, nor a promo version.

An infamous artillery weapon that can deliver a vicious rain of damage upon early game threats, but lacks reliable self-defense abilities.

Mortar Towers operate much like the namesake. They are very fragile and easily destroyed, but deliver a significant barrage of damage over a long range.

Position the mortar to make use of its long range, which can be even longer than the listed 70m due to the nature of firing.

Mortar Towers are a way to slowly clear out enemy defenses without needing to risk units, but are not very resilient otherwise.

Mortar Towers can aid in pushing the first camp, but will not serve much else.

Mortar Towers are incredibly powerful weapons with a vast zone of control. Their firepower has the potential to shut down a push entirely.

Once built, the Mortar Tower locks down a massive area that denies access to enemy movement. This alone is very powerful, and the tower has the firepower to back it up.

A single mortar barrage can cross damage thresholds never before witnessed at the tier, a threshold that is almost impossible to tank. Enemies beware when they trigger this tower.

Beyond a certain point this tower cannot fire, making fast moving units a reliable counter to this weapon.

Mortar Attack only damages ground units. A flying unit can destroy this tower without any danger.