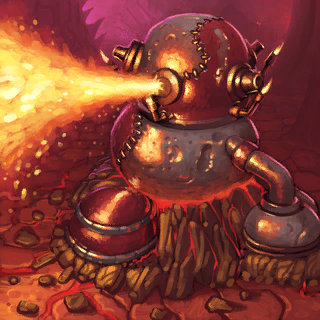 Building of the Fire faction. This common card was released with the Twilight Edition and has no affinity variants, nor a promo version.
In Skylords Reborn this card is available to all players as a starter card.

The far more destructive successor to the

Fire Bomb. The Morklay Trap has the ability to deliver its explosive payload at a distance.

Passive: Explodes when being destroyed charge deals 800 damage to enemies in a 20m radius around its target, up to 2000 in total. Knocks back small and medium units.
Damage will stack with Explosion Blast, enabling the trap to inflict up to 1760 damage to a single target.

Incredibly powerful, the Morklay Trap is capable of decimating whole armies with its destructive payload, and even in situations where the destructive blast is ill-advised, it functions as an enhanced

Fire Bomb. These traps are best placed in choke points where the enemy is forced to funnel into the bomb for maximum explosive effect.

Although they can serve as an enhanced Fire Bomb, the ranged explosion capacity of these bombs means that you can decimate encroaching armies with loads of damage. Most standard maps make good use of them, but some excel with them such as act 3 of Encounters with Twilight.

Because they appear in the second tier, they generally do not see use in rPvE unless pushing the next camp would be too difficult, and needs an extra push in damage to overcome it by luring the inhabitants away into the traps range.