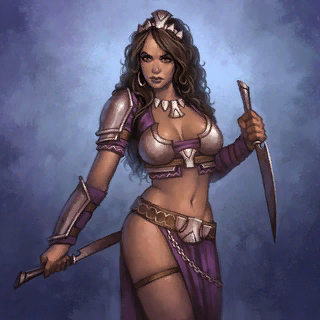 Unit of no faction. This uncommon card was released with the Lost Souls Edition and has no affinity variants, nor a promo version.

A Ymian queen and former military leader, she has been raised to become one of the most powerful Skylords.
Dark Art
Power Cost: 70 Energy

Active: Activate to gather up 3000 life points from corpses within a 20m radius of Moon. They will create a huge dark sphere that dissolves after 2 seconds transforming the corpses former maximum life points into healing power that restores the life points of every friendly unit within that area. Reusable every 30 seconds.
Necroshade
Power Cost: 60 / 60 / 50 / 50 Energy

Active: Activate to use Moon's abilities as an assassin to cripple a hostile unit within a 50m range. Within the blink of an eye she will appear at the side of the targeted enemy intoxicating it with a weakening substance: her victim will then only be able to move at walk speed and takes 20 / 20 / 20 / 30% more damage for 15 / 20 / 20 / 20 seconds. Reuseable every 10 seconds.

Moon was born a princess of the desert kingdom Ym, a city-state that travels with the shifting sands of the Red Desert. She was not only trained in the dark magic arts that are traditional throughout Ym, but also brought up to be her later husband's bodyguard. For this reason, she, like all Ymian queens before her, received initiation as a Necroshade - an assassin skilled with both blade and shadow magic.

Ym never yielded to the Giants, and when she became queen, Moon was forced to assassinate her own husband for he was on the verge of betraying his kingdom to the sons of the stone. Named queen, she concentrated her efforts on fighting the giants who grew more threatening each day, for Ym was the only free mortal kingdom left.

Moon devised tactics for quick strikes and liberation raids, using Ym's shifting nature to evade retaliation from the Stonekin. It was at this time that Brannoc fled to Ym, seeking refuge and support for his giant slayer machines. Moon saw him not only genius but also the fierce resolve it would take to see this through. She gave the grim smith all the support he needed - and her heart along with it. Brannoc found comfort in her arms, but Moon soon realized he would never let go of his former wife. All of his resolve was committed and tied to her memory. Unwilling to give up on him however, Moon even abandoned her rule and returned to Lyr with him, to form a resistance there. But this only brought her into conflict with his daughter Viridya.

Moon, facing the full hate of Viridya but with only half a heart from Brannoc to support her, yielded and returned to Ym. Much later, Brannoc returned, and this time they joined forces as warriors. With Brannoc's Giantsbane guns and Moon's tactics they created the first working resistance. From this there started a crusade against the giants that, with the help of the gods, would eventually break the giant rule and return the mortals to freedom.

For her incredible achievements during this campaign, Moon is considered to be the greatest military leader of mortal history. As such, she became a legend, When the gods raised her to become a Skylord, she took an oath never to command armies again, for she had sent millions to their death during the war against the giants.

Adviser to the Skylords

With the departure of the gods, Moon became a tactical adviser to the Skylords. for her knowledge of all the strange magical artifacts hidden across the lands and their use in battle during the war against the giants has proven invaluable

In the long idle centuries at the side of the gods, Moon has developed a special knowledge around fighting other Skylords. She alone has developed a spell that can ban a Skylord from the Forge and make him mortal. While the gods were still there, there was no way for her to use it, but now things have changed. But why she was preparing to fight other Skylords - nobody knows.
Community content is available under CC-BY-SA unless otherwise noted.
Advertisement