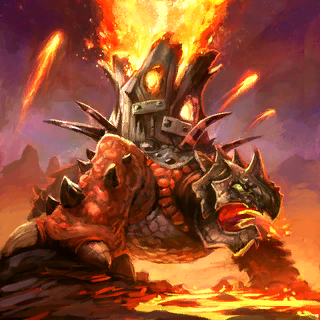 Unit of the Fire faction. This ultra rare card was released with the Twilight Edition and has no affinity variants, nor a promo version.

An extremely powerful creature of fire that is ironically a tortoise. The Moloch is a being of pure fire that has an immense level of resilience, but is vulnerable in melee combat.

Moloch is an extremely mighty force on the battlefield, capable of crushing entire bases under its feet. But its immense power cost of 350 and lack of a counter damage bonus prevents it from being overpowered. Creatures with an Extra-Large counter bonus can do battle with the Moloch and have the highest capability to defeat it in Melee, additionally the Moloch cannot attack airborne targets; despite its artwork suggesting otherwise.

The Moloch comboes well with other creatures that can cover its vulnerabilities. The

Emberstrike can offer cheap protection from airborne targets with their Fire Lance ability, and the

Moloch serves as a very powerful tank that can divert enemy fire for other, more fragile units. The

Fire Worm both combo strongly with the Moloch, as both these creatures are strongest when safe from harm. Something that the Molochs incredible tanking can provide, and simultaneously protect the Moloch from airborne threats and aid in the destruction of Melee creatures from behind their Moloch ally.

The Moloch is a strong force in the end game that can decimate whole bases and shred through artillery towers in a flash. When properly supported, the Moloch can distract the firepower from a whole army and come out swinging. It can even do battle with certain bosses and stand up to them.

However, moloch is easily felled by strong melee creatures and is not exempt from death by environmental hazards.

Moloch is a very capable card but because of how slow it is, its use in Random PvE is highly limited if not completely ineffective. It is highly unlikely to see any combat since it cannot catch up to the swarms of Extra-Large creatures. Unless it deviates down a path the group has not taken, which it can do its job very well.

Not the wisest decision for the mode, but it has its moments.