Mo can refer to the playable card, the campaign scenario and to the eponymous story character. 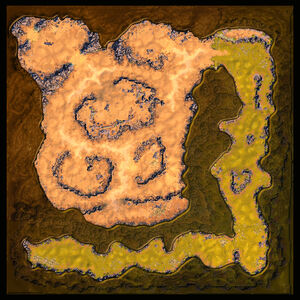 You will control the White Juggernaut, Mo. Guide him on his search for his friend, Twinaxe, and keep him alive. Dodge Banzai Birds and lower bandit morale by destroying their patrols, lieutenants and gun positions. Taking out their Command Walker will break their morale.

Expert
Mo is a 1-player PvE scenario that can be played on Standard, Advanced and Expert difficulty. It is part of the campaign story The Search for Twinaxe.

Guide the Juggernaut, Mo in his search for his friend, Twinaxe.


Let's look back a few weeks to when the mortals emerged back to the surface, pursued by the angry giants...

The Twilight’s vile glow had faded somewhat in the new sun’s light yet it had not left the sky entirely.

“Sorry,” mumbled Mo, the White Juggernaut lifting his foot off the crushed wooden cart. Seconds before it had contained a refugee family's belongings. Now the precious cargo was no more, ground into little more than dust. He ignored the furious cursing of the humans as he scanned the crowd, searching. Once the fleeing mortals had realised Mo meant them no harm, their curiosity had quickly faded as grim reality asserted itself. Mo snorted, amused these tiny beings could so quickly find him irritating rather than terrifying.

“Excuse me, creature,” shouted a stout voice behind him. “Would you be so good as to move your… er… rather massive behind out of the way? We flee an enemy intent upon our total destruction.”
Mo turned to look down at a man clad in steel. A large group of refugees was piling up behind the impressive warrior in a bid to escape the underground caverns.
“Have at it, knight,” Mo boomed, stepping aside. “I have no quarrel with your kind today.”
The knight nodded then motioned to the refugees. Terrified people began to push past Mo’s huge legs, a few reached out bravely to brush his leathery skin. Suddenly a familiar gleam of red leather caught Mo’s eye. He reached down and plucked an orc from the stream of refugees.

He held the struggling warrior close to his red-glowing, rather short sighted eyes.
“Bambi,” Mo rumbled.
“Bomber!” the orc corrected, in a quavering voice.
“Seen Twinaxe?”
The orc stopped struggling and squinted.
“He was commanded to load those landships. Special cargo for the Red King, not seen him since.”
“The treasure ships, eh?” Mo remembered Twinaxe waking him, full of talk about the Red King’s plan to steal the giants’ gold. The fool had thought helping the greedy human would bag him a load of gold. Mo had wanted nothing to do with the foolish scheme.

Twinaxe must have joined the Red King’s men anyway and helped them load the landships. Probably thought it a smart career move, the silly bastard.
Mo absently tossed Bomber over his shoulder and growled in irritation. As Bomber’s scream faded into the distance Mo turned and came to a decision. He would find his friend, save him from himself, so they could get back to the way things were. Otherwise Twinaxe was sure to get himself killed and Mo couldn’t let that happen.
Searching for an orc in a world gone mad would normally be an impossible task, but Mo knew he had a chance. His friend gossiped more than a Lyrish fish-wife and was always eager to impress his gargantuan friend. Twinaxe’s loose tongue had spilled both the treasure fleet’s course and eventual destination that night. Mo just hoped his friend hadn’t been wrong.


As Mo hurtled along the currents of QueekQueek’s spell, he mused on how it wasn’t every day someone was teleported by a talking pig who could fly. Beginning to enjoy the odd sensation, he crossed his hands behind his head and waited for the powerful spell to release him. Mo still wasn’t sure if he could trust QueekQueek, but knowing his course was set somehow relaxed him. Who knew what would happen next, Mo could only try his hardest to find his friend. Twinaxe might not be the sharpest sword in the armory, but he’d always been loyal and to Mo that made him family. Wonder if I can jump all the way to the treasure fleet’s destination this way, he thought, grinning. With a violent jerk, the spell released the White Juggernaut and he tumbled into the unknown.

High up in the Forge, Moon shook her head. This was certainly a very different proposition from nursing Rogan Kayle’s fledgling kingdom into being. It was more like watching a bunch of village fools merrily dancing along a road of self destruction. As a Ymian she had never really understood the Red King’s people, but they needed someone to rally them and bring hope. If the best man for the job happened to be a creature known as the White Juggernaught, who was she to argue? Moon sighed and, for the first time in a thousand years, strongly desired a drink. 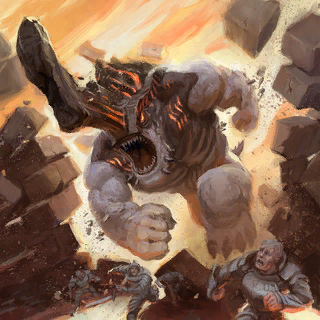 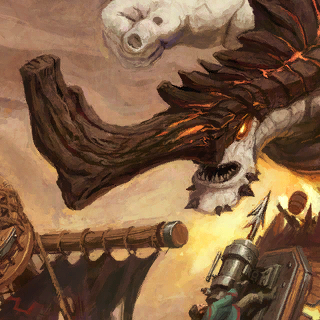 Unit of no faction. This rare card was released with the Renegade Edition and has no affinity variants, but a promo version.

Active: Activate to heal Mo. The overall heal amount depends on how many friendly units are surrounding Mo. The higher the amount of the maximum life points of nearby friendly units is the more powerful will this spell become. A maximum of 3000 life points may be healed while there is a minimum heal of at least 500. Reusable every 30 seconds.
The famous White Juggernaut.
Mo's Better Blues
Power Cost: 50 Energy

Active: Activate to increase the damage of nearby friendly units by 50% for 20 seconds. Reusable every 30 seconds.
Stampede
Power Cost: 100 Energy

Active: Activate to rush towards the target dealing 220 damage to enemies along the way, up to 9900 in total. Reusable every 30 seconds.
Group Hug
Power Cost: 50 Energy

Active: Activate to heal Mo. The overall heal amount depends on how many friendly units are surrounding Mo. The higher the amount of the maximum life points of nearby friendly units is the more powerful will this spell become. A maximum of 3000 life points may be healed while there is a minimum heal of at least 500. Reusable every 30 seconds.