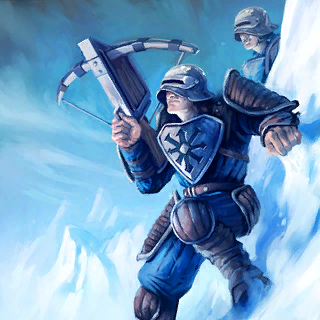 The most mundane of the Squad Archers just so happens to be quite effective! Simplicity at its finest.

Master Archers, for as basic as they are; are one of the most popular Archers in the game. Possessing the highest base HP of any tier 1 archer, and capable of putting out decent damage once upgraded, they are as solid as it gets for the early game. But for all their strengths, they typically need aid from other units to cover their flanks. The

Frost Mage being the most popular of these, which can form an extremely powerful combination that is difficult to beat.

In the campaign missions, Master Archers are a must for they just make the early-game for Frost. Pairing them alongside the

Northguards can allow you to clear any opposition from T1 to T2 in a standard mission. Higher difficulty missions may require stronger synergy however, with

Imperials to deal with medium-sized threats and tank damage, or the

Frost Mage to annihilate any small opposition with ease.

Large numbers of Master Archers make short work of any small enemy squad, though greater danger is posed by the larger enemy creatures best suited to destroying squads. The

Twilight Hag in particular is most deadly for her knockback.

Master Archers are very effective in large numbers in the lower difficulties, but as the difficulty rises, you will want to supplement them with

Home Soil along with the

Ice Barrier, creating a very powerful combination that is difficult to fail with. Other assistance becomes redundant in this case.