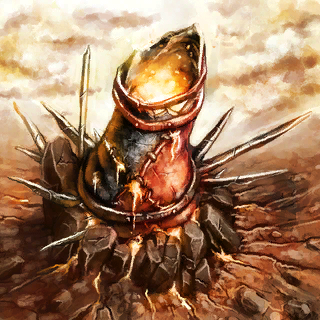 Building of the Fire faction. This uncommon card was released with the Twilight Edition and has no affinity variants, nor a promo version.

Passive: Construction time is reduced by 50%.

Makeshift Towers can be found on Battlegrounds in the fire preset. These towers pelt your units with rapid balls of fire, though they don't deal much damage and can hardly take a beating from most foes.

Autocast: Every 3 seconds, tower fires an explosive grenade that deals 40 damage to enemies in a 10m radius around its target, up to 60 in total.

Makeshift Towers are not very dangerous, but do whittle at your units gradually, and they themselves can draw your attention for a time away from tougher, more dangerous threats. Dispatching them should be low on your priority list when engaging.