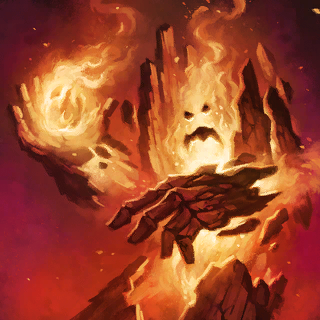 A strong, beginner-friendly card. Magma Hurlers are cheap and deliver powerful ranged damage, but suffer from a slow rate of fire and low HP.

Autocast: Every 3.5 seconds, unit hurls a magma ball that deals 270 damage to enemies in a 8m radius around its target, up to 405 in total. Knocks back small and medium units.
The knockback provided by this attack enables the Magma Hurler to be a strong counter to any creature other than Extra-Large, and provides strong crowd control for armies of smaller creatures

When in large groups, Magma Hurlers are extremely powerful. Capable of chaining their fireballs together to unleash a huge burst of damage instantly, often killing many creatures in one shot and preventing retaliation. The cheap price of these units enables them to be brought to bear in groups and amplify their damage output, which can even fell powerful XL creatures like the

The lower HP of these units however, makes them very susceptible to being burst down by strong damage sources. Particularly artillery turrets and long-ranged bombardment. Worse yet, the slow attack speed of the magma balls means they struggle to defeat large groups quickly.

Magma Hurlers are extremely powerful in most Campaign Missions, and can typically breeze through the third era with ease. Some later maps such as Nightmare's End may require extra reinforcement for the Magma Hurler to be protected from direct attack, but generally they can handle things on their own.

Higher Difficulties, Expert especially, will challenge the low HP and slow attack speed of the Magma Hurler. If used, they should be reinforced with another unit designed for close combat. The

Vulcan is a strong choice for this, given its powerful close range attack.

Similarly to Campaign Missions, the Magma Hurler is very powerful in rPvE, and can be useful even after you have gone T4 due to the high damage output of its ranged attack. In single player rPvE in particular, spamming Magma Hurlers is a strong approach to clearing most of the difficulty levels, though you may need to reinforce them around rPvE 8-9. In multiplayer, the assistance of your allies will enable you to spam with complete impunity, and free up slots for extra cards in T3.