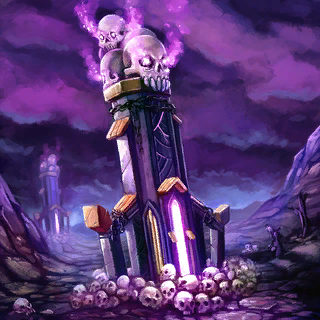 Building of the Shadow faction. This common card was released with the Twilight Edition and has no affinity variants, nor a promo version.
In Skylords Reborn this card is available to all players as a starter card.

A tower with impressive stats shares with it a grim source of firepower: The tower must use its own life points to attack.

Active: Activate to sacrifice an own unit in order to transfer the victim's life points into own life points. Reusable every 15 seconds.
Still alive

Passive: Regenerates 5 life points every second.
After 10 seconds, the Lifestealer can fire one extra time.

Lifestealers fulfill a solid early-game defense option since they deal a significant level of damage. However, they are not effective against foes that can deliver high damage at a distance, especially due to their attack siphoning life points.

Lifestealers are very cheap however, and are thusly a perfect throwaway tower for defending frontal positions.

Lifestealers can readily hold against a small number of foes alone, and can assist against an early army when supported.

Against opponents with very long range, or siege capabilities, the Lifestealer will quickly turn to rubble.

It is not recommended to take this tower into higher difficulties due to there being a greater amount of foes that can smash it early on.

Lifestealers can be good for creating a "Buffer Zone" to pull the foes in the first camp into range. This is a viable tactic if you are unfamiliar with advanced tactics.

Outside of this, the Lifestealer has minimal other uses.