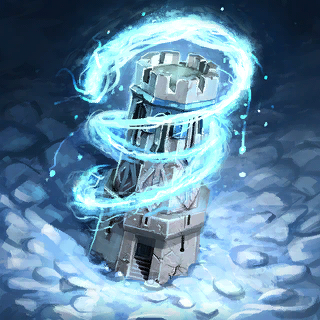 Spell of the Frost faction. This common card was released with the Twilight Edition and has no affinity variants, nor a promo version.
In Skylords Reborn this card is available to all players as a starter card.

A valuable spell that instantly restores life points to buildings.

Kobold Trick is a spell best used when its healing is put to full effect. Try to avoid using it until the amount of hitpoints dips below what the spell will restore, as to ensure the power is not used falsely.

Beware the cooldown, as during that time your buildings are vulnerable to burst damage.

Glacier Shell. Both of which emphasize defending buildings.

Kobold Trick is heavily playstyle dependant but can also be influenced by the map. Typically defensive maps are best to use this one since buildings usually accompany that.

Kobold Trick is usually not needed in rPvE since buildings are not of a major concern. It can be useful in situations where your wells and orbs come under attack, but usually its uncommon to see.

Kobold Trick is a must-have card for any player running a frost orb. Against many destructive burst damage sources like

Enforcer, keeping your buildings hitpoints above certain thresholds is all but a necessity to avoid an irredeemable power loss. Additionally, this spell allows you to delay and hold off an attack longer; letting you regroup your forces to counterattack.

Because it only requires one frost orb, many popular splash decks can incorporate it into their gameplay.

Kobold Trick can be a critical asset in the defense of Power Wells and Monuments, as many players utilize heavy burst damage tactics to down a well or monument.

Kobold trick is dirt cheap, making it easy to spam.

In T3, where creatures with the capacity to annihilate structures come into play, such as

Giant Slayer, this spell loses a great deal of effectiveness. It simply cannot keep up.