King of the Giants

King of the Giants
Edit 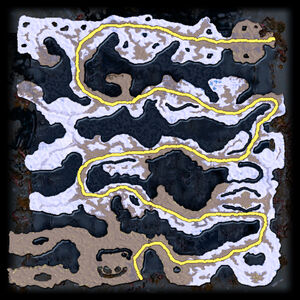 Rogan Kayle is luring the giant king Jorne to the human realm. Make sure to clear away all blockades on his way and look out for artifacts that might aid his quest.

Expert
King of the Giants is a 4-player PvE scenario that can be played on Standard, Advanced and Expert difficulty. It is part of the campaign story The Titans.

King of the Giants to Lyr. Face a lot of powerful Stonekin at the foot of the Giant Throne mountains.


Brannoc strode through the valley his minions scattered behind him, scorching the earth.

The former smith turned, his mighty new body ablaze with the flames of righteous fury. It felt good to be flesh and blood once more, not an apparition. The power he wielded was now his own, he owed nothing to gods, mortals or the Forge any longer and was free to hunt for the secret.

Brannoc’s gaze settled on a small figure standing on a hill before him, her hand placed on the bark of a withered birch. He squinted.

A gust of wind caressed the woman’s slender frame. Through swirling strands of hair, she stared up at the titan.

“You did this!” she screamed. Brannoc took a step back in the face of such sudden fury.

“I showed them their limits,” he replied. “They did not listen. It was they who foolishly brought the curse into the world, not me!”

Viridya pushed herself away from the birch and started to walk towards him. Grass caressed her bare feet and flowers bloomed bright and vivid were she trod.

“Just as with your cannons and fires, you don’t care what has to be destroyed to achieve your ends!”

She stretched out her arms, as if to embrace the massive fiery form of her father. In instant the breeze became a tempest and the ground burst open. Vines and roots erupted upward, quickly they shaped themselves into a massive Grimvine. With a primal roar it hurled itself towards Brannoc.

The former Skylord’s weapon flared as it cleaved the creature in two with ease. But from all sides new Grimvines rose to take their vengeance upon the Plaguebringer. And so it was, a goddess of Nature and a titan of Fire clashed.

Rogan dozed, his head resting against a boulder. Though many miles away, he could hear the battle rage between the two monstrosities. For three days now their battle had savaged the land, though neither had gained the advantage. Unthinkingly, they had laid waste to the carefully rebuilt city of Hope and were moving towards Lyr itself. If this continued nothing that had been achieved would matter; precious Lyr would fall once again.

A desperate plan took shape in Rogan’s mind. If the two great powers were too finely balanced, a third would surely break the deadlock. There was only one being Rogan imagined would tip such a conflict. If he could hurl suns in the sky, he could give these two a proper beating. Rogan would not have to worry about getting Jorne, the Giant King, to join the fight. Luring him to it and surviving to tell the tale, that would be the real trick.


Rogan found it hard to keep his footing, what with the ground constantly heaving beneath him. The Giant King was close now. And he was about as enraged as Rogan had both hoped and feared he would be. With aid from above, he might be able to reach Lyr and the fighting titans in time. Then it was just a matter of gracefully getting out of harm’s way. Although admittedly harm, in this case, was closing in uncomfortably fast.