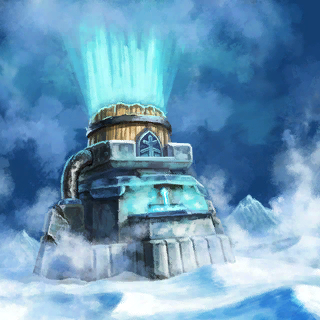 Building of the Frost faction. This uncommon card was released with the Twilight Edition and has no affinity variants, nor a promo version.

A unique device that is designed to prolong the lifetime of nearby Power Wells by reducing their capacity consumption whilst keeping their output of produced power at the same rate.

Support building, does not attack.
The Juice Must Flow

Passive: Within a 25m radius the remaining capacity of own and friendly Power Wells takes 40 / 45 / 50 / 55% longer to deplete. Production per time increment remains the same.

Usage is very situational, only advisable for very long matches where the respective Power Wells would have exhausted their capacity otherwise.

Usage is not advisable, since matches in this mode have a time limit and power wells have a high enough capacity for the card to not grant any relevant benefit. One should consider the

Resource Booster instead, as it is better suited to faster-paced matches.

Usage is not advisable, since matches in this mode usually do not last long enough to draw any value from the card. Additionally, the bound energy invested in the building, without any short-term payoff, leads to a direct power disadvantage which the opponent can exploit.