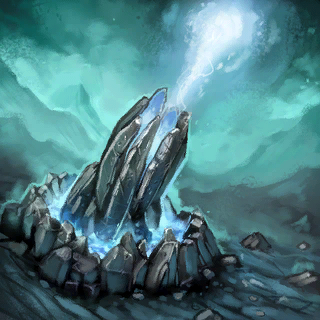 Building of the Stonekin faction. This common card was released with the Renegade Edition and has 2 affinity variants,

Nature, but not a promo version.
In Skylords Reborn the Nature affinity is available to all players as a starter card.

While it does not possess the same firepower as

Artillery, Hammerfall provides a support aura around itself, offering (

Passive: Friendly units within a 20m radius will receive an Ice Shield that absorbs up to 800 damage and last for another 15 seconds upon leaving area around Hammerfall. There is an initial capability to install up to 3 Ice Shields that may exhaust but will restore over time. Cannot be disabled by spellblocking abilities.
Adamant Alloy

Passive: Friendly units within a 20m radius will be healed for up to 250 in total per second. There is an initial healing capability of 1500 that may exhaust but will restore over time. Cannot be disabled by spellblocking abilities.
Adamant Alloy

Hammerfalls are most effective as supportive nodes rather than artillery, though they still can serve this role in gameplay, you will get the most use by utilizing their auras to the max.

Place them in locations where you can benefit both from the aura and still get use from the cannon.

The hammerfall is a strong contender on many campaign maps, and like any artillery is very strong behind walls or defensive structures.

hammerfall is not a card that really sees any use in rpve in due part to being a defensive tower in T3. Enemies are not known to be a threat to your wells and monuments at this point.

The Hammerfall is not a viable structure to use in PvP. In most cases you will not have the time nor the ability to construct and use it effectively.

With 15% resistance to damage, Hammerfall can better weather combat than other structures. By (

Units standing near the structure benefit from constant healing.

Units standing near Hammerfall receive ice shields that can extend endlessly if they stay close.

The damage of Hammerfalls attack is rather low for the tier and for an artillery, making getting kills on equal-tier creatures difficult.

800 damage is not very difficult for most T3 creatures to tear through.